The Yellow Cab scheme cars of the 90s, in absence of competition brought more than a dozen car buying options for the masses. Although initially intended to be used as taxis, most of these cars later went into private use.

Related: Remembering Daewoo Racer- The Underrated Car of the 90s

Cars such as Suzuki Mehran, Khyber, Nissan Sunny or the Mitsubishi Lancer were already present in the market and were trusted by the people of Pakistan as a brand name. However there were a few cars which had no history in our market when they arrived as Yellow cabs. Besides Daewoo Racer, the other popular name among such cars that were introduced as taxi in early 1990s was the Hyundai Excel sedan. Like Daewoo, the Hyundai Excel had a South Korean origin but unlike the aforementioned Racer which was based on European Opel Kadett, the Excel under the skin was very much Japanese. 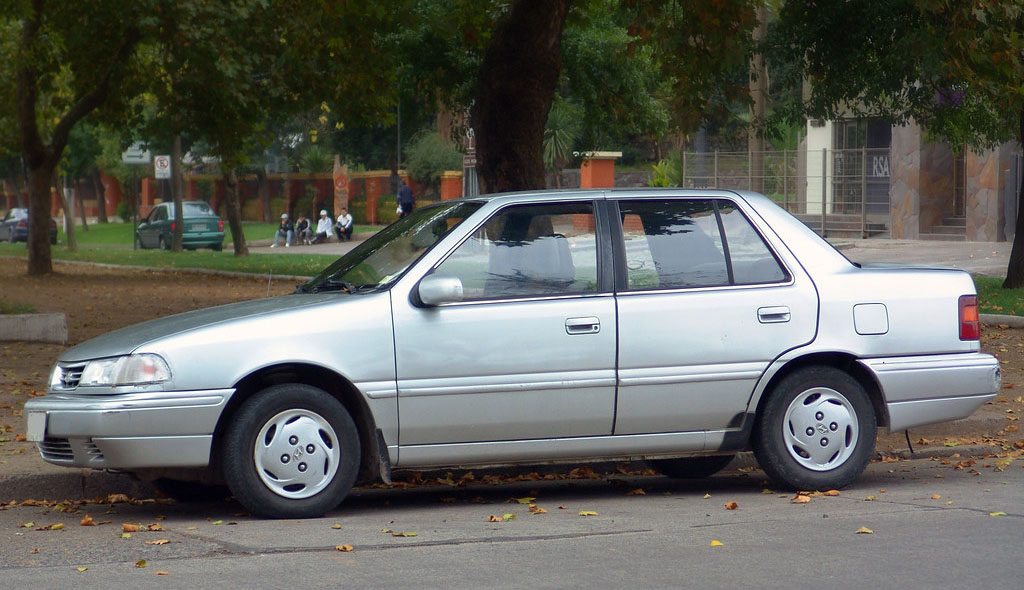 Many might not know that the first Hyundai branded car available in Pakistan was Pony during the 1980s. Hyundai Pony was a small rear-wheel drive car produced by the South Korean manufacturer between 1975 and 1990 and was known as Hyundai’s, and more importantly South Korea’s first mass-produced car.

The Hyundai Excel was a successor to Pony however in various markets it was sold under Pony nameplate and acted as the third generation Pony. As for Excel nameplate it was the 2nd generation model that was produced between 1989 and 1995 and was the first-ever front wheel drive car developed by the South Korean manufacturer. Like Pony, the Excel was also designed by renowned Italian automobile designer Giorgetto Giugiaro and carried Mitsubishi engines under its hood. As a taxi in our market, the Excel carried a Mitsubishi-sourced 1.3 liter (1,298cc) Orion 4G13 SOHC engine under its hood which was good for punching out nearly 83hp. Unlike its South Korean cousin Daewoo Racer which had a 4-speed manual gearbox, the Hyundai Excel had a 5-speed manual transmission which was considered a plus. The fuel consumption as well as maintenance cost was much lower than the Daewoo since the same engine was serving with Mitsubishi Lancers in our market, and since it was all Japanese-tech under its skin, it was much easier for local mechanics to cope up with. 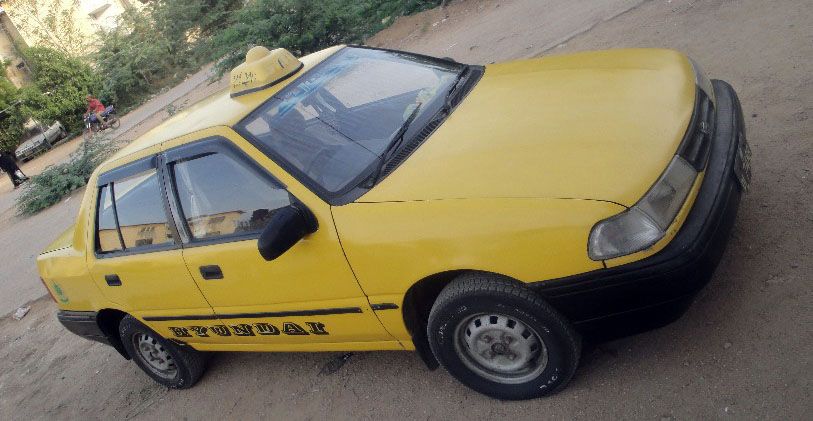 The unique identification lamp on top of Hyundai Excel’s roof

The distinguishing characteristic of these Hyundai Excel yellow cabs was a unique taxi identification lamp mounted on top of its roof. While the rest of the lot had typical rectangular lamp, the Excel had a large roundish lamp with a tomb-like protrusion. This made it stand out from the rest and was easily identifiable from distance even in night time. Plus the rear wheel arch used to have a small black piece which covered lower part of the rear doors, which was also something exclusive to the Hyundai Excel.

The Excel measured 4,282mm in length, 1,608mm in width and 1,384mm in height while carrying a 2,383mm wheelbase. Overall it was larger than Suzuki Margalla and almost identical to the E100 Indus Corolla in terms of dimensions but had a shorter wheelbase. Hyundai Excel had a surprisingly roomy interior while the ride quality was pretty impressive too. The looks of the car were also decent which were more synergized to the 90s styling trends as compared to the rather boxier Daewoo Racer which had its origin from the mid 1980s.

Related: History of Kia Pride- the First Kia in Pakistan

And after a couple of years like most of the Yellow Cab cars, the Excel too went into private use in large numbers. Most of the cars were bake painted, which became a thing in demand back then & the color choices were literally limitless. 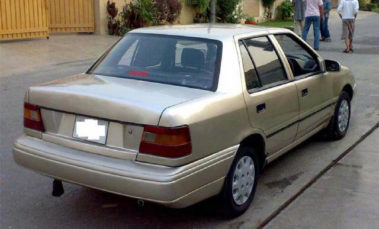 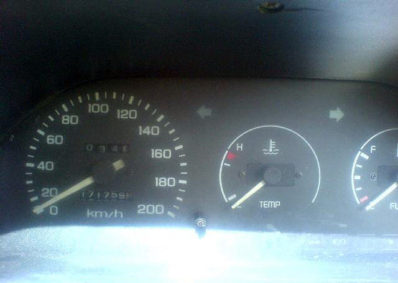 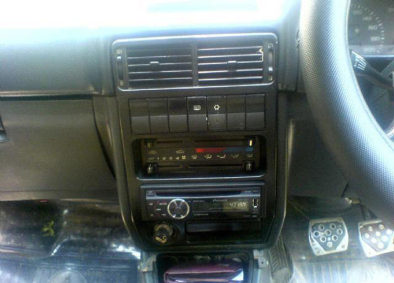 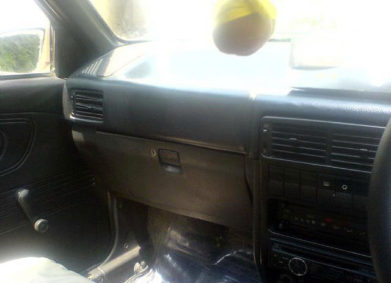 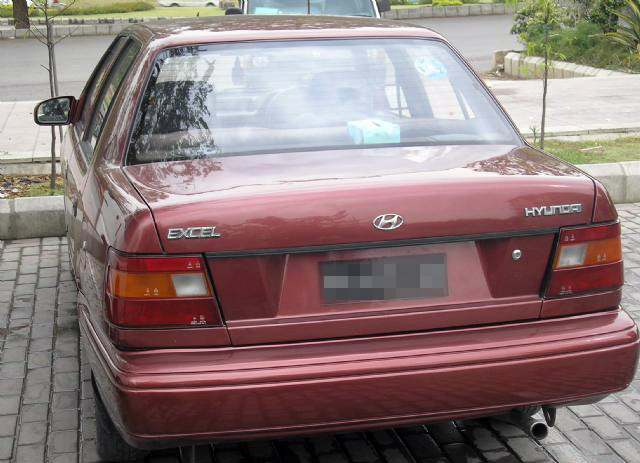 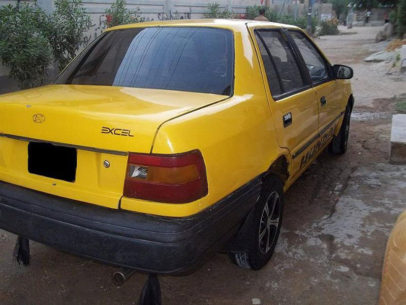 Today however, it’s quite hard to find a Hyundai Excel in decent condition. Like most of these Yellow Cab cars, sourcing parts was a major issue. And while the Excel had a Mitsubishi engine under its hood, finding body parts was always going to be a problem due to lack of proper after sales support. Later many people tried putting in E100 Corolla headlights, grilles & bumpers. The interior of most cars showed missing vents and refurbished or substitute door panels in absence of availability of original. Still the Hyundai Excel alongside Daewoo Racer performed much longer than any other out-of-market car introduced in the Yellow Cab scheme in Pakistan and provided a much needed variety which became scarce ever since the Big 3 appeared in our market. Hyundai Verna/ Accent/ Solaris is considered as a successor to Excel

What happened to Hyundai Excel internationally? Well, it was succeeded by Hyundai Accent in 1995 however in various markets, the first generation Accent continued to be sold under the Excel nameplate. Hyundai Accent is currently in its 5th generation and is also called as Verna and Solaris in different markets.

Do you have an ownership experience of Hyundai Excel from the 90s? Share with us using the comment section below.

i own an excel which i bought 2nd hand back in 2010.. i am still using it and was my daily driver since feb 2020 when i sold my vios.. anywayz, to date it had noisy underchassis and the aircon failed but it still is usable.. until recently when the alternator broke and i am still waiting for the delivery of my online purchase.. by the way, the cooling system had leaks which i was able to temporary sealed and some part had corroded beyond repair which was eventually condemned ang bypassed but overall, it quite a reliable car which… Read more »