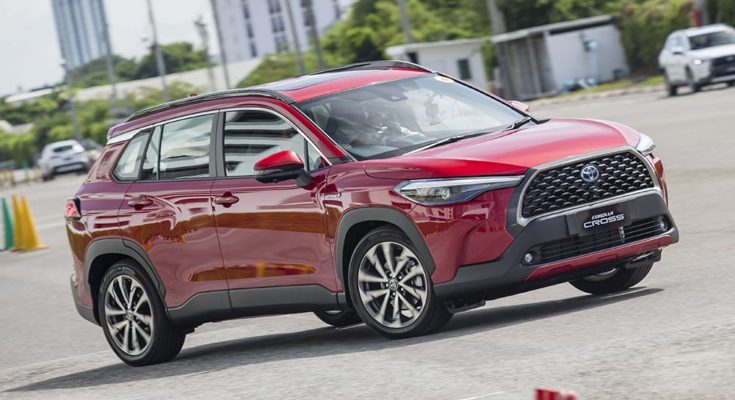 Earlier this year, Indus Motor Company (IMC) revealed its plans to introduce a hybrid SUV in Pakistan that would go against the likes of Kia Sportage and upcoming Hyundi Tucson. For long there was a mystery regarding which car IMC will be introducing, however launch of Toyota Corolla Cross earlier this year solved the ambiguity regarding IMC’s upcoming hybrid crossover SUV.

Now according to latest information, a couple of units of Toyota Corolla Cross have been imported and will be used by IMC for extensive trial & testing. As per sources, the company will ideally be introducing the latest hybrid SUV either towards the end of this year or early next year. The Corolla Cross will initially be launched as CBU however depending on its success IMC will proceed to assemble the vehicle locally.

Under the hood, the Corolla Cross hybrid gets 1.8L 2ZR-FXE engine that’s capable to churn out 98 hp of power and 142 Nm of torque. There is a 600-volt electric motor supplementing the setup with 72 hp and 163 Nm. More details on Toyota Corolla Cross can be read here.

Crossover SUVs have started to become much more attractive for automakers as more & more of these vehicles are being introduced recently compared to conventional sedans & hatchbacks. With Corolla Cross, IMC wants to ride in the bandwagon to taste the same sort of success which the likes of Kia Sportage are experiencing lately. What are your expectations with the upcoming Toyota Corolla Cross? Let us know with your comments.

Sportage and Tuscon are AWD too so Toyota Corolla cross is no from them. Not the category wise at least.

I.M.C. must price it between 4.8 to 6 million PKR else the company is not going to be able to benefit from the rising tide of people who expect features to be offered at a reasonable price. Since this group is ready to hug a change, therefore, Toyota name does not matter to them.