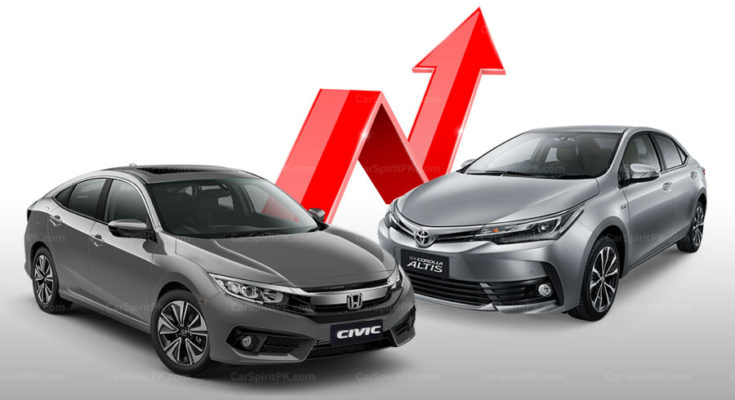 Car prices in Pakistan began to witness a rapid increase since December 2017 when Pak Rupee which for long hovered at around Rs 104 started to decline against the US Dollar. Subsequently prices of local assembled as well as imported vehicles sold in the country were revised quite frequently.

Things started to go from bad to worst ever since the beginning of  fiscal year 2019-20. It all started with the ban on purchasing new cars by non-filers which constitutes nearly 60% of car buyers in the country. Later the government announced that non-filers of tax return can register only one vehicle against their CNIC. Then the government imposed Additional Customs Duty (ACD), Additional Sales Tax (AST), Federal Excise Duty (FED) ranging from 2.5 to 7.5% depending on engine displacement and the turnover tax which hampered the sales quite badly.

This was coupled with constantly increasing car prices with auto assemblers blaming forex reasons. Despite claiming to have achieved up to 70% localization, the auto industry remains highly vulnerable to exchange rates and the depreciation impact is usually transferred by 110%. Below will give you an idea of the price difference during the last 14 months.  In July 2019, one dollar was equal to Rs 159, today it stands at Rs 168 with a 5.6% increase during the last 13 months, whereas below will give you an idea of how much the prices were increased.

Interesting thing to note from the table above is the fact that the impact of Rupee depreciation was almost fully transferred to consumers whereas in few cases the price increase was even more than the currency fluctuation. In case of double cabin 4×4 pickups which saw an additional 7.5% duty imposed in financial budget 2020-21, the was no additional taxes imposed on the passenger cars. However surprisingly the maximum increase (in %) can be witnessed with Isuzu D-MAX, Suzuki Alto and even the United Bravo which enjoys Greenfield incentives.

Auto industry had forecasted to increase its sales to 0.3 million by 2021 and half a million units by 2022; however from the looks of it, the sector is far from achieving this goal. The sales of locally assembled vehicles saw a deplorable 53% decline in FY2019-20 compared to sales from preceding year with just 110,583 units being sold in the entire year compared to 235,229 units sold in FY2018-19.

The latest blow to the local auto industry was the COVID-19 pandemic for which the industry was never prepared. Due to lockdowns the assemblers had to shut down the plants towards the third week of March for almost two months which severely dented the production schedules, vehicle sales & deliveries. For the first time ever, zero sales were recorded in the month of April, whereas sales in the following months are showing a slow recovery.

Local auto assemblers had sought high priority government attention in shape of a stimulus package to deal with the impact of the coronavirus pandemic, however the Pakistan Automobile Manufacturers Association (PAMA) has shown displeasure over the absence of such measures in the recently announced Financial Budget 2020-21 where the government has literally shown a cold shoulder to the auto industry. Automakers & parts manufacturers believe that the automobile industry would face further devastation with lack of government support and revenue generated from the sector would also take a hit.

Local auto industry has always enjoyed utmost government support ever since, however this will probably be the first time when government hasn’t looked interested in providing even the slightest of relief to the ailing sector. With sales already reduced by nearly 80% what will be the future of local assembled cars in Pakistan, only time will tell. However from the looks of it, the road ahead isn’t going to be easy at all.

be prepared to see this article copied by amateur writers of our pioneering blogs..