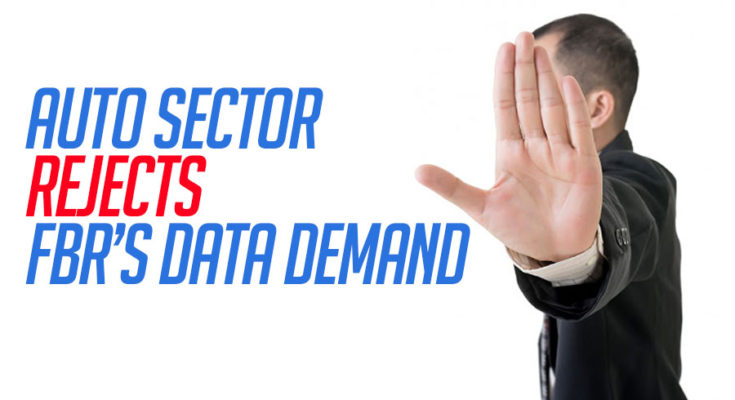 Auto assemblers and auto parts manufacturers have asked the Federal Board of Revenue (FBR) not to force companies to submit their data repeatedly as it will only hurt the ease of doing business drive in the country. Pakistan Automotive Manufacturers Association (PAMA) and Pakistan Association of Automotive Parts and Accessories Manufacturers (PAAPAM) have made the request in separate letters written to FBR Chairman Javed Ghani.

PAMA Director General Abdul Waheed Khan, while conveying the response of association members, stated that the procedures specified in SRO 615(1)/2020 were not workable since the data required was already part of FBR’s record. He said:

“Auto sector is a 100% documented sector, hence forcing companies to submit the data again and again will only add to the bureaucratic hurdles to businesses. PAMA has always supported government’s efforts for the documentation of economy but such rules only hurt the ease of doing business in the country.”

He pointed out that PAMA members were monitored by a number of government bodies including the Engineering Development Board (EDB) and FBR at various stages; hence their complete record was already available with the government.

Meanwhile, PAAPAM Chairman Muhammad Akram stated in his letter that the association was duly governed under SRO 655(l)/2006 and under strict regulations/controls exercised by the EDB, Ministry of Industries and Web Based One Customs (WeBOC). He said in his letter:

“We submit that the entire procedure of verification laid down in the said SRO was already being strictly implemented by the EDB for all auto parts manufacturers. And complete verification of their consumption is carried out and records maintained by them (including synchronizing with automotive assembler’s production), in line with the processes laid down in the proposed SRO 6l5.”

thanks for sharing really appreciated its awesome

In other countries the burden of proof is on the prosecutor whereas in developing countries with colonial past e.g. Pakistan, the government institutions are just tools of oppression rather than to serve the public. The public is always “guilty even after proven innocent”.

Hence the bureaucratic red-tape and hurdle-creation. Basically instead of making others’ jobs easier they shamelessly take salaries and pensions from the public and their basic method is to gain a power trip by stopping others’ life-progress.