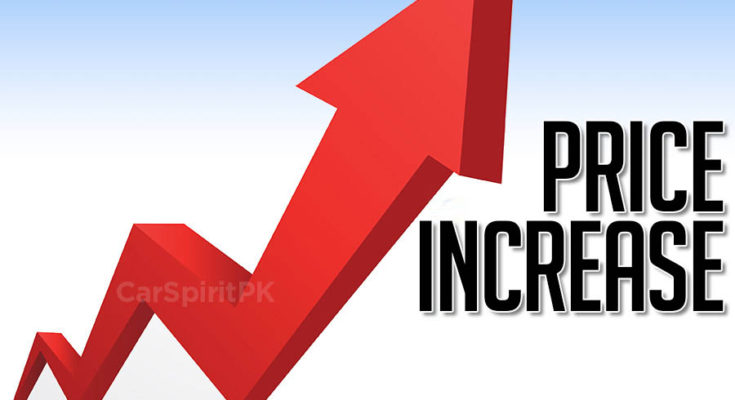 As indicated in June, local assembled cars in Pakistan have started to experience a new wave of price hikes. Regal Automobiles increased the price of 800cc Prince Pearl by Rs 100,000 followed by a massive price push by United Motors which saw the 800cc Bravo hatchback becoming expensive by Rs 214,000.

Honda has also announced to increase the prices of its cars by up to Rs 100,000 effective from the 10th of August whereas Suzuki and Toyota are soon expected to announce their prices revisions. Suzuki has already increased the price of base VX trim of Alto 660cc by Rs 63,000. So far, other automakers including FAW and Kia hasn’t announced the price revisions yet but looking at the ongoing trend one may expect to see the prices of all local assembled cars to be pushed up.

During the last 30 days, Pak Rupee has been hovering around Rs 166 to 168 against the US Dollar while reaching the record low. However car prices in Pakistan are always vulnerable to exchange rates. Even slightest of variation in Rupee-Dollar parity results in the increase in prices of local assembled vehicles.

Despite claiming to have achieved up to 70% localization, the impact of Rupee depreciation has always been fully transferred to the consumers. And even in cases such as when Rupee recovered by up to 6% against the Dollar late last year and in fact stayed stable for nearly 4 months, the prices of local assembled cars instead of being reduced were pushed further up.

Sales of locally assembled passenger cars witnessed a 53% decline in sales during FY2019-20 due to slowdown in economic activities, higher interest rates, constantly rising car prices & towards the end due to coronavirus pandemic which virtually put car sales at a halt. According to data released by Pakistan Automobile Assemblers Association (PAMA), the overall sales of cars plunged to 110,583 units in FY2019-20 as compared to 235,229 units sold in the previous fiscal year. This is also the lowest-ever sales in a year recorded after the economic downturn of 2008-09.

The local industry had demanded the government for a stimulus package to cope up with the deploring situation however the Pakistan Automobile Manufacturers Association (PAMA) has shown displeasure over the absence of supportive measures in the recently announced Financial Budget 2020-21 where the government has literally shown a cold shoulder to the auto industry. The sector has demanded the government to immediately reduce the taxes in order to help revive the ailing auto industry which was already battling with nose-diving sales & is now hit hard by the COVID-19 pandemic.

And now with prices of local assembled cars reaching a new high, it is hard to expect that the sales will improve. Considering this, the government needs to come forward and introduce measures, perhaps similar to what Malaysia did, that could help revive the ailing industry & improve car sales in the country.