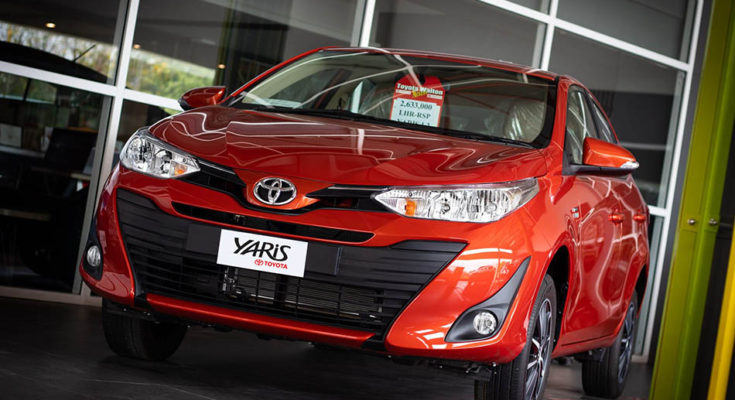 Ever since the new Toyota Yaris was launched in Pakistan, the market has been talking and comparing the local assembled Yaris to different cars and models across the globe. While the buzz around the new vehicle is not surprising, it is interesting to see how the local Yaris is being compared to the Toyota Yaris manufactured in India.

As a matter of fact, Indian car market has no comparison with the Pakistani car market, yet Toyota keeps on offering new generation vehicles to the market which plays a major part in uplifting the Pakistani automotive industry. The launch of new Toyota Yaris is certainly among these steps.

There are many factors included that make cars in India cheaper than the cars in Pakistan. The fact that the duty rate in Pakistan is much higher than the duty rate in India is one of the reasons for the high prices here. India has a higher localization whereas their duty rate varies from 15% to 30% while Pakistan’s rate of duty varies from 30% to 46%. The hourly wage on average in India is $0.61, while in Pakistan the hourly wage on average is $1.23 contributing to an increase in cost of production in Pakistan. Let’s compare Indian Yaris to Pakistani Yaris to identify the differences and their reasons. 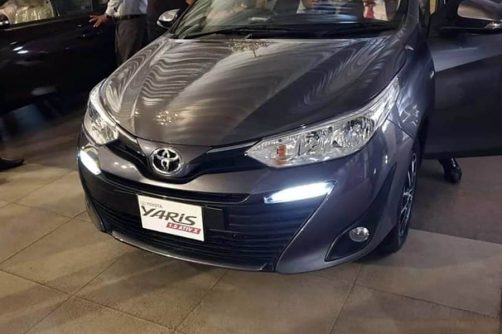 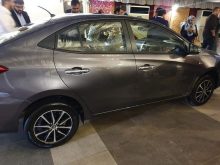 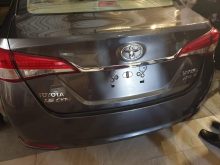 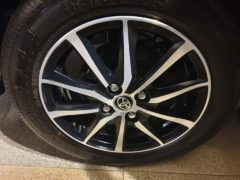 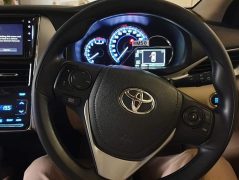 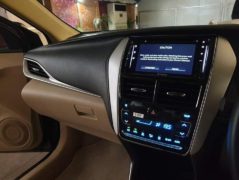 The top-spec Toyota Yaris AtivX costs PKR 2,959,000 after the latest price increase, while the fully loaded Yaris in India costs INR 1,418,000 (PKR 3,133,780). Despite economies of scale, the Indian Yaris is expensive than Pakistan. But it has specifications that Pakistani Yaris misses, such as paddle shift, cruise control, projector headlamps, 7 airbags etc. Here is a brief comparison of Yaris in Pakistan & India. 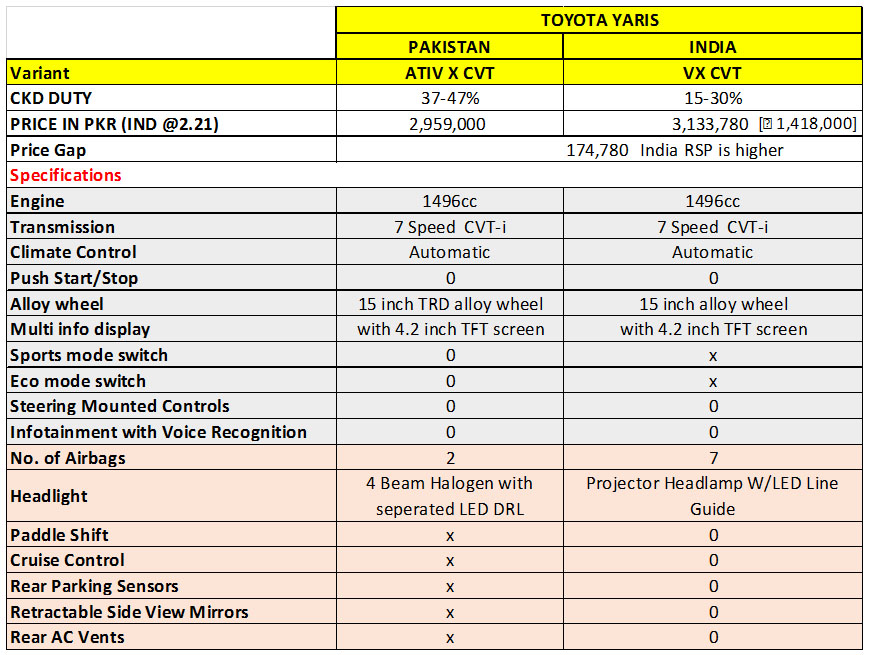 From the above, we can see that Yaris in Pakistan and Yaris of India have similar specifications like smart entry, push start, 6 speakers, automatic climate control, steering wheels control, MID with 4.2-inch TFT screen as well as the tilt feature of the steering wheel. While Yaris Pakistan have features such as trunk chrome garnish, eco mode and sports mode switches in addition to the Indian version. While Yaris in India comes with cruise control and paddle shift, not offered in Pakistan.

Comparing in terms of safety, Yaris in Pakistan offers advanced safety features like vehicle stability control, hill start assist control and traction control as standard in all models. While India only offers these features in the high-grade variant. India however has 7 airbags, while Yaris comes with 2 airbags. It is interesting to identify, that no local sedan in Pakistan comes with 7 airbags.

To conclude, if we look at other cars in Pakistan in comparison to Indian vehicles, mostly the Pakistani vehicles lack in major features and are usually not equipped with advanced specifications like India. But after comparison, it’s good to see that Toyota Yaris in Pakistan in a reasonable price offers advanced features, more than that of other cars including Honda City as well as Toyota Corolla, both. What are your thoughts about this? Do let us know in the comments below.

ok its sponsored. but i was not expecting this from you guys. your site is always neutral, it should stay neutral too

one suggestion: please keep ur site free from these SPONSORED POSTS

“it’s good to see that Toyota Yaris in Pakistan in a reasonable price offers advanced features, more than that of other cars including Honda City as well as Toyota Corolla, both”

Please stick to the truth. No more marketing propaganda from the big mafia three. There is no disguising the fact this is a small car at a very big (inflated) price. If they had given 7 airbags like all the international markets, we might think that Toyota Indus had at least covered the basics by not compromising on safety. Going on about “chrome garnish” and a few software tweaks to allow the illusion of “sports mode” with a button to push, does not justify the high price or useless “features”. Feels more like they are marketing a kid’s toy. Please… Read more »

Appreciate your concern sir and please don’t worry our opinions will remain unbiased. This is ‘sponsored content’ and we are considering whether to continue to accept such posts in future.

Please don’t. Please don’t be the other website which-must-not-be-named.

not matter how hard Toyota will push this car is not going to sell. This is God’s wrath upon you, and you people are still not learning. wake up Toyota Pakistan, public is not going to digest these stupid paid articles

How desperate is Toyota? Same post in two different blogs. Surprisingly no sponsored comments. Marketing strategy from Toyota seems to be simple, say this car is better than the one in India and expect us to buy this car in droves. We are not fools Toyota.

Dear commentators, month of Ramazan is about refraining from trash mouthing other people and controlling your feelings. In your haste to please shaitan, all of you so-called educated people have missed reading two words “sponsored content”. Lastly, don’t worry, I.M.C. is merely copying the actions that we would have done had we been given a chance to abuse our fellow beings.
Just take a look at what we do in our daily lives in best manner, supposing and harming other people’s feelings.

What utter nonsense! Halfway through the article, I though I was reading an article on paid-and-bought-for Pakwheels Blog post-Hanif Bhatti written by IMC’s freshly hired interns.

If this is the BS CS.pk will post on its website, please inform beforehand so we regular visitors can find some other automotive website telling such rhings from consumer’s perspective.

I hope CS.pk does not succumb to assembler sponsored BS instead of of looking after ordinary Pakistani’s interest.

Agree. They should maintain their identity

This article is a bad patch on carspirit pk reputation 👎👎 please don’t publish these type of articles. Really disappointed 😔

Even if it was a sponsored article, it should still have truth. The fact is Indian Yaris is much better than Pakistani one, boot chrome garnish and an electronic gimmick like sport button which i am sure make no alterations to car’s steering or suspension does not justify it. First, Indian yaris has features like 7 airbags, front parking sensors, android auto, apple carplay, Rear AC vents, Leather interior and 1.5 engine over Pakistani yaris so how does this make any sense. Besides, the article lies, Indian yaris comes with Vehicle dtability control as standard unlike PK car, moreover it… Read more »

forget about the Indian Yaris VX, even the base Yaris J in India kicks the hell outta IMC Yaris AtivX the so called top of the line.. 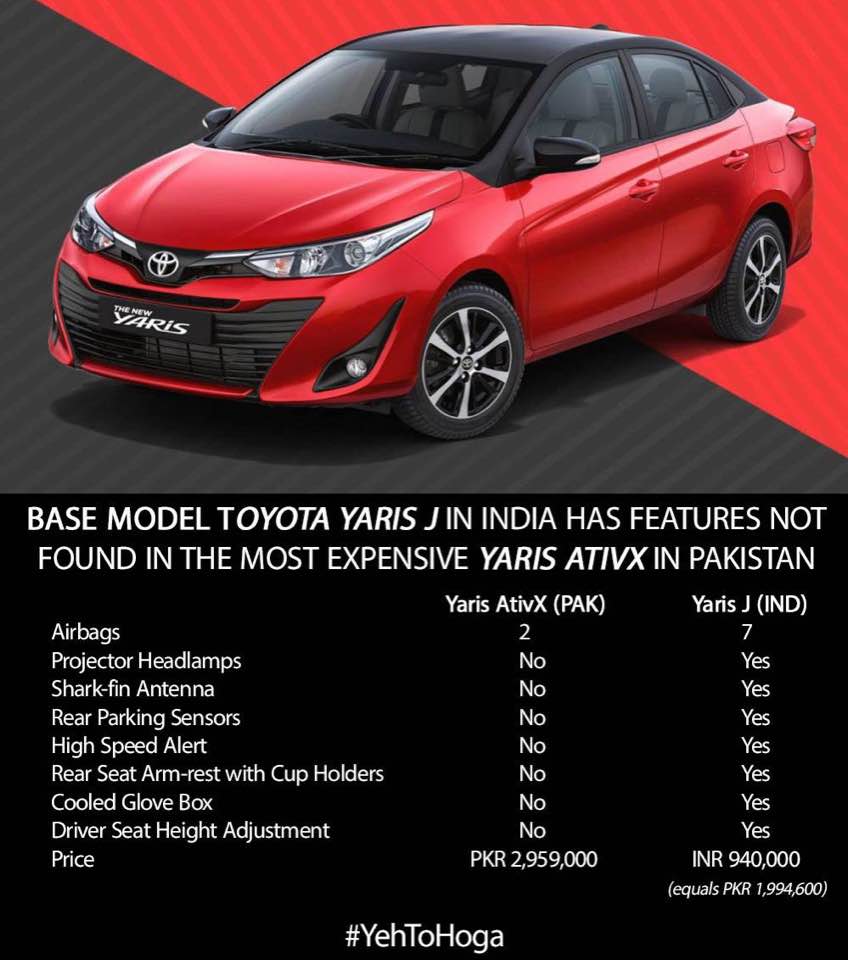 All local manufacturers should start offering additional features (that are not included in by default in offered car but are offered internationally) as optional. This would enable them to keep the price intact and allow consumers have these features in their cars if they deem necessary.