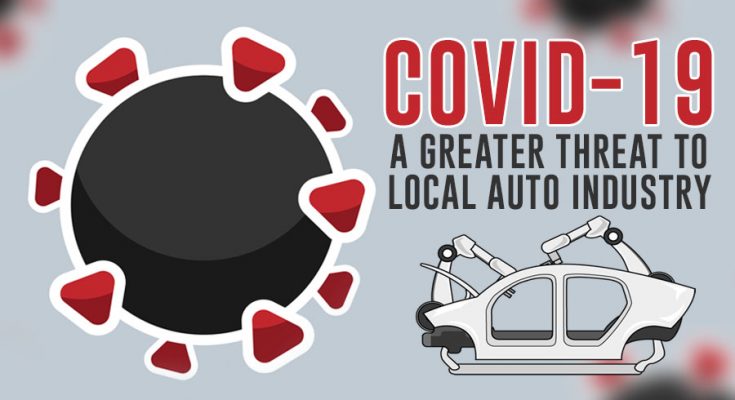 Local automobile industry which was already experiencing major troubles ever since the beginning of current fiscal year has received an additional blow in the form of coronavirus (COVID-19) outbreak and is now on the brink of a collapse, The Express Tribune reports.

Following the directives given by the government to stop the spread of coronavirus, majority of automobile manufacturing plants have halted production operations and have remained closed since 23rd of March 2020. The plants that have stopped production include Indus Motor Company (Toyota), Honda Atlas Cars, Atlas Honda (Motorcycles), Yamaha, Pak Suzuki Motor Company, Dysin Automobiles, Millat Tractors and Hinopak Motors.

As of the first 8 months of this fiscal year, automobile sales have reduced by 44% to 90,834 units compared to 162,240 units in the same period of previous fiscal year. Pak Suzuki spokesperson Shafiq Ahmed Shaikh while speaking to Express Tribune pointed out that the auto industry which was already in a crisis, would receive a huge blow due to plant closures and suffer further losses. He said:

“More than a million people are directly and indirectly employed in the automobile sector, hence, we request the government to draw up a separate bailout plan for this sector.”

The Pak Suzuki spokesperson went on to suggest:

Shafiq Ahmed Sheikh pointed out that the auto sector has not laid off its direct employees yet although jobs of vendors (indirect employees) have been lost in large numbers. The current situation is like a natural disaster, which has added to the woes of local auto sector.

Prior to the coronavirus outbreak, the rupee devaluation was the main reason behind the deteriorating situation of the auto sector as it turned auto parts and raw material expensive, thus raising the cost of production of carmakers. In addition to that, a steep interest rate hike had also gravely impacted the automobile sector as car leasing became costlier, which discouraged people from purchasing vehicles.

However consumers also blame unjustified price hikes made by local automakers which despite Pak Rupee recovering against the US Dollar in 2H-2019, kept increasing the car prices up in order to dampen their declining profits.

Coronavirus is a disaster Allah Pak protect my country from this pandemic.

No bailout package for the Japanese assembler mafia.