Geely has officially launched its latest ICON SUV, earlier today in a completely online launch event that was watched by millions across China. The highly anticipated model received over 30,000 orders since it was unveiled in November 2019 through online pre-booking, showcasing the soaring demand for the striking SUV.

The Geely Icon stays true to the avant-garde minimalistic analog-inspired design first shown in the Concept ICON that was displayed at the 2018 Beijing Auto Show. Breaking from the traditional SUV design trend, Geely ICON designers used a “less is better” design ethos to move towards a purer more 8-bit analog form. From the onset, the ICON has been a globally designed model with input from Geely’s five global design centers, including an exterior that was developed in Geely’s California design studio and an interior that was developed in Geely’s Barcelona studio with both being revised and brought to completion in Geely’s Shanghai studio.

On the exterior, the arrangement of the headlamps has been patterned after an infinity loop, a symbol of time, creating a unique split design. The arrangement is not only visually appealing it has also improved lighting efficiency by 30% and extends road visibility to 165m.

While being visually minimalistic, the ICON has put a focus on technology; intelligent flushed door handles pop out when users approach and retract when they leave, helping the ICON maintain a clean visual image while in motion or parked.

Inside the ICON, the minimalistic analog-inspired design helps give the cabin a futuristic sci-fi feel. The symbol of time is once again visually present in the design form of the air vents and central console. Dual interactive 10.25 inch screens, an information panel and central infotainment console dominate the dashboard. From the two interiors screens and mobile devices, users can interact with ICON and connect to the world through the GKUI Geely Smart Ecosystem.

The Geely Icon is the first in its segment to make use of 48V mild hybrid technologies that bring fuel consumption down to new lows of 5.7 liters per 100km (17.54 km/l). The 48V system is paired with Geely’s leading 1.5T engine that offers 174.5hp of power and 255Nm of torque in base form, the addition of the 48V system provides a further 13.5 of power and 45Nm of torque giving a total of 188hp and 300Nm of torque. The ICON also uses Geely’s 7-Speed DCT (Dual Clutch Transmission) to help achieved a 0-100km.h sprint in 7.9 seconds. 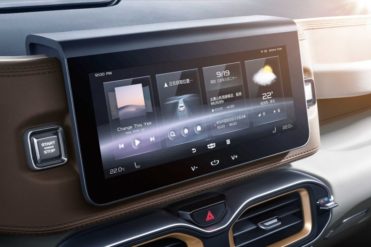 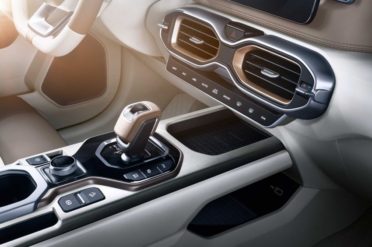 In terms of safety, ICON improves on Geely’s 360 ° safety identification circle by an additional 180°. On top of being able to see a 360° panoramic image of the vehicle on the interior screens, the driver is also presented with a 180° view from the side, front, or rear of the car, effectively eliminating all blind spots from the drivers view.

In response to the new Coronavirus epidemic, Geely developed in record time, a new Intelligent Air Purification System (IAPS) that is N95 certified. This highly efficient air purification system works in tandem with the ICON’s air conditioner to isolate and eliminate harmful elements in the cabin air including bacteria and viruses.

“Geely ICON’s launch not only showcases the core strength of Geely’s global development network, it also shows our forward thinking and demonstrates the high-tech digital future we are all moving toward. It represents Geely’s leap from merely meeting user demands to creating leading trends. Just as the Geely ICON will become a new icon for global SUVs, Geely Auto will also become an icon in terms of automotive technologies and global auto brands.”