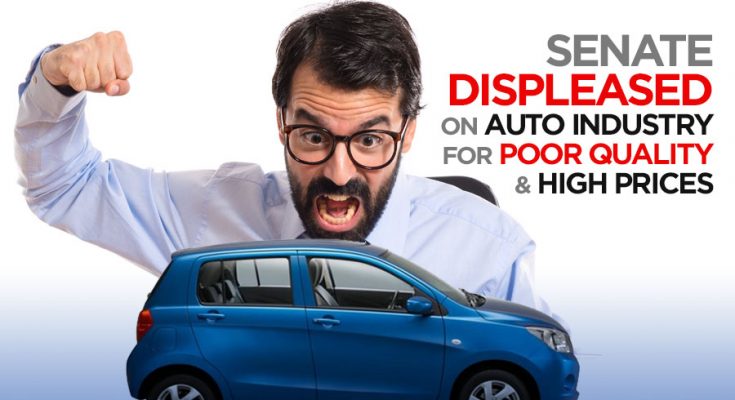 Senate has shown displeasure over local auto industry for assembling vehicles in the name of manufacturing, increasing prices without any checks and failing to maintain safety standards threatening the lives of those who drive them.

According to a report published in Dawn, Minister for Parliamentary Affairs Azam Swati informed Senate that new rules were being put in place to punish the manufacturers of unsafe vehicles and said that a draft to this was put before the federal cabinet as well. He said the companies would be held responsible for an accident claiming lives, if the air bags in cars did not open and other standard safety safeguards were not in place.

“They (automakers) will have to pay multi-million rupees in fine.”

The Minister also said that auto companies had been given a concession of zero tax on import of machinery, but they were assembling cars in the name of manufacturing.

Earlier, Senator Atiq Ahmad Shaikh said the automobile industry had formed a cartel and poor quality vehicles were being assembled in the country. He said a mafia was in control to ensure immediate delivery on the payment of an additional amount in the name of ‘own’. He also said these companies kept on increasing prices without any check and failed to meet their commitments under which downstream factories were to be set up, adding that new investment in the sector could not be attracted because of this cartel.

Senator Mohsin Aziz also said the companies were not manufacturing cars in Pakistan, but were only assembling them, even after getting relief on duty. Senator Rehman Malik regretted that there was no check on prices of ‘locally manufactured’ cars and proposed establishment of a price and quality control authority.