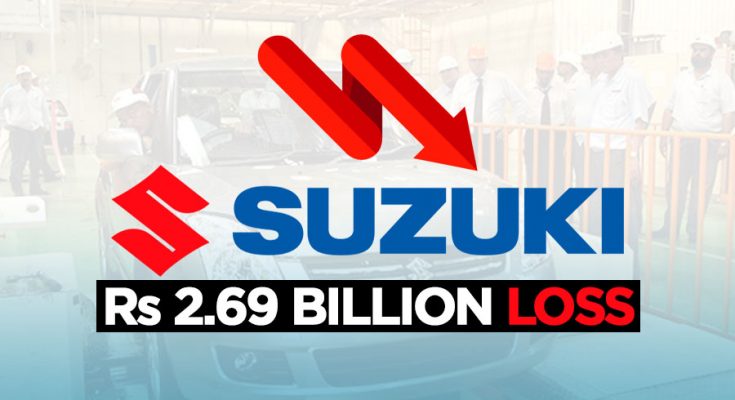 Pak Suzuki Motor Company, the largest auto assembler in the country recorded a loss of Rs 1.16 billion in the quarter ended September 30, 2019 which came on the back of a massive reduction in auto sales.

The company had posted a profit of Rs 94.8 million in the same period last year, according to a notice sent to the Pakistan Stock Exchange (PSX) on Friday. Loss per share stood at Rs 14.11 in the July-September 2019 quarter compared to earnings per share of Rs 1.15 in the same period of previous year.

This is the fourth quarterly loss for Pak Suzuki in a row, and quite according to market expectations given the deplorable state of the auto sector. The introduction of new federal excise duty for the auto sector and weakening rupee, coupled with a slowdown in economic activities, have led to a massive decline in auto sales.

Overall the sales of automobiles recorded a 67% decline year-on-year in the quarter ended September 2019. Despite the hike in prices to adjust the impact of rupee depreciation, the company’s earnings registered a decline due to massive plunge in car sales.

Pak Suzuki is somehow helped by the newly introduced Alto 660cc entry level hatchback which is selling in volumes. Otherwise sparing Alto, the entire Pak Suzuki lineup is suffering from a deplorable -68% decline in sales.

The situation looks even bad when you take in account the company’s performance in the first 9 months of this calendar year (from January 1, to September 30, 2019), Pak Suzuki recorded a loss of Rs 2.69 billion whereas it had posted a profit of Rs 1.39 billion in the same period of previous year. Loss per share stood at Rs 32.64 in the period under review compared to earnings per share of Rs 16.92 in the previous year. This is also being labeled as Pak Suzuki’s worst financial performance in the last 8 years.

hey pak suzuki!! your times up!