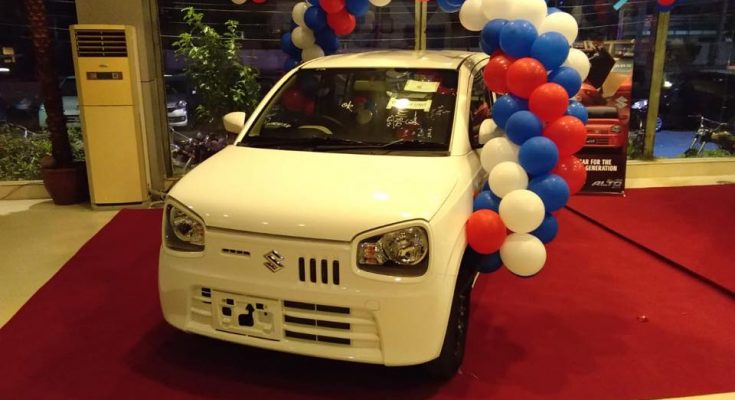 The newly launched 2019 Pak Suzuki Alto 660cc has made it to the PAMA sales chart for the first time. The 8th generation Alto 660cc was launched in June replacing 800cc Mehran as the entry level hatchback in Pak Suzuki’s lineup.

According to the figures released by PAMA (Pakistan Automobile Manufacturers Association), the company sold 1,685 units of Alto in June which, considering the economic slowdown is quite impressive for a newly launched car to say the least.

This is also due to the absence of competition as Alto 660cc despite being allegedly overpriced is the cheapest mass produced car available in the country. Although one might bring United Bravo into debate, but that’s not a mass produced car to be honest and despite being in production for nearly a year in our country, the Bravo is available in selected cities of a single province only.

For the sake of comparison, if we take sales data of last fiscal year, the average monthly sales of Wagon R comes out to be 2,717 units, Cultus is 2,313 units and Mehran was 2,665. Bear in mind since Mehran went out of production in April, its sales took a dip in the last three months. Otherwise known as Pak Suzuki’s golden egg laying duck, Mehran had soaring sales average of 3,851 units a month in previous fiscal year.

The upcoming sales data for Alto 660cc will be interesting, since Pak Suzuki has jacked up its prices effective from the 1st of August 2019 which is expected to put a dent on its sales. However the company is confident that it will fill the vacuum of used small cars, the imports of which had been curbed by the government through various measures from January onwards.

And while Honda Atlas and Indus Motor Company (Toyota) had announced to halt production in specific days amid slowdown in vehicle sales, Pak Suzuki announced that it will neither cut down production nor resort to plant shutdown in weekdays. The company also assured that the production targets of 2019 remains same as those fixed at the start of year. According to information, Pak Suzuki would produce over 76,000 units in the second half of this year, compared to 60,000 unites rolled out in H1.

over priced junk. people only buying because they dont have any other option

I would love to see you try and alleviate people’s misery by trying to launch a car.

i think its because of prebookings. sales will subdue in coming months for sure. just wait n see

whoever got their hands on alto now, will keep others from buying this dabba now, its so inferior quality with a pathetic 37hp, now even BRAVO looks better against it