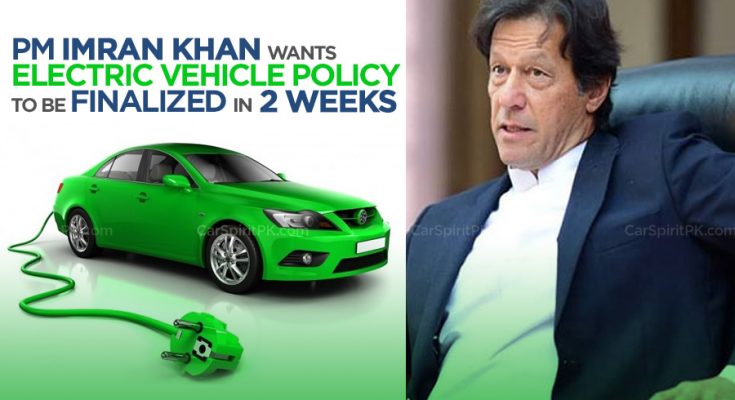 Prime Minister Imran Khan has directed the Ministry of Climate Change to finalize an electric vehicle policy in the next two weeks and present it before the federal cabinet for approval.

He gave these directions while chairing a high level meeting on climate change in Islamabad today. The prime minister was informed that the main reason behind environmental pollution in Punjab province is smoke emitted by vehicles.

During the meeting, officials of the ministry stressed the need for promotion of electric vehicles to reduce carbon emissions. Besides, it was also discussed that electric vehicles will not only help cut oil import bill but also address issues stemming from climatic changes.

The prime minister was also briefed about the steps taken to combat smog in Punjab province and the impact of climate changes in Gilgit Baltistan and Azad Kashmir.

PM Imran Khan emphasized the need for coordination amongst the federal and provincial institutions to respond effectively to any flood like situation in the summer season. Progress made so far on the ten billion tree plantation campaign was also discussed in the meeting.

finally something positive from PM IK

a good news indeed. hope its implemented too

Great IK. How about creating jobs first by making policy changes? Renault is not coming to Pakistan, any thoughts on this?

A much appreciable move by PM. Should be implemented soon.

positive news for sure. but Pakistan should focus on power shortage too. otherwise electric cars have no future here

Mate, PM need to setup a workshop paid by govt. That workshop or lab should be open to anyone with a good degree and some experience in mechanical engineering and stuff. We need to devise a battery that can be charged in under 2 minutes and which can go at least 500 miles on a single charge. Or better yet if there is load shedding, we can use magnetic coil charging or BRING THE GREAT TESLA wireless charging to life.

SUPER SUPER exciting times ahead. Seriously I love this PM.. At least he know how to move forward.. Imagine Electric super charger in place of petrol pumps. Super chargers are going to be amazing. But many other people will lose their jobs. Mechanics, engine tuning, oil and radiator. Everything will be gone..

thats how it goes.. in 90s Kodak and Konica were popular for photography equipment, the advent of digital cameras resulted in their shutdown. Same goes for VCR, cassettes, and then CD manufacturers.. You have to go along with time 🙂 EVs are the future as all international automakers have already announced their plans to shift towards electrification. We cannot stuck with Euro-2 forever,, its the right time to prepare for a shift. However in addition to this, govt should device a policy to phase out the fuel burning obsolete vehicles off the road. it will take time but lets begin… Read more »