Pak rupee has plunged to an all-time low of 148.50 to the US dollar in the inter-bank market on Thursday. Since last week, the Rupee has weakened by over 5% or Rs 7.10 already.

The recent drop comes a day after Prime Minister Imran Khan constituted a committed to control rupee devaluation after its free fall reaching 147 in the open market yesterday. He had warned strict actions against dealers if they were found selling dollar above Rs 144. 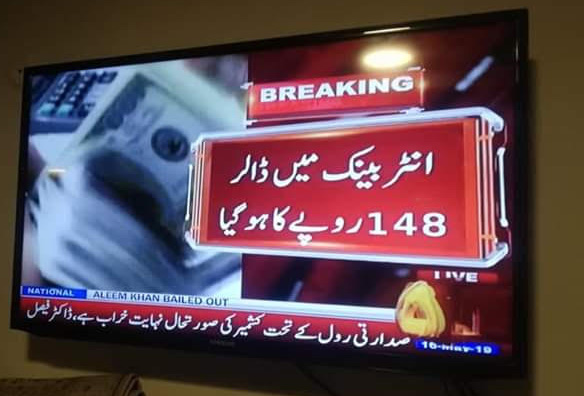 However experts said the drop in rupee was expected, as the government had agreed to leave inter-bank market free from state control under the $6 billion IMF 39-month loan program for Pakistan.

Related: Rupee Bounced back After Hitting New Record Low against US Dollar

The government on Sunday signed the loan program in which IMF had conditioned to let the market forces decide rupee-dollar exchange rates. There was speculation in the market that the rupee may drop to 165-170 to the US dollar under the current cycle of depreciation.

The rising value of US Dollar is expected to affect all major sectors including the automobile industry. Due to constantly depreciating Rupee value, the year 2018 has already witnessed up to 5 price revisions by automakers operating in Pakistan. In 2019, a couple of price revisions have already been announced by Suzuki, Toyota and Honda, while the rising prices and tax curbs by the government have been casting a negative impact on the automobile sales in the country.

Since December 2017 onward, car prices have already gone up with an increase of up to 250,000 on each local assembled model, whereas the currency has cumulatively depreciated by up to 35% since then. Automakers are generally too quick to pass the impact of rupee devaluation on to customers, and with Pak Rupee now hitting record low, auto consumers of Pakistan might get hit by another price revision quite likely in near future. This is just the beginning…..

Clapping for these gentlemen

Soon Civic turbo will be 4 million and cultus will be 2 million. oh God save us!!!!