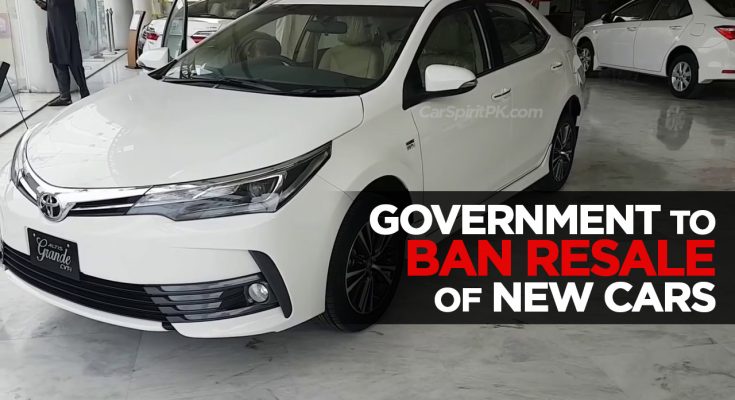 The government is likely to ban the resale of new vehicles as it aims to curb the practice of charging premium/ on money by car dealers. As per sources, the government will approach Council of Common Interests (CCI) for legislation aimed at banning resale of new vehicles within six months by imposing transfer tax as percentage of price of vehicle.

The meeting was convened in compliance with the decision of the Federal Cabinet on 20th March 2019 wherein it was decided that a regulatory framework will be developed including penal provisions, if required, within three weeks to check the illegal practice of charging premium by car dealers from genuine buyers over and above the invoice price of the vehicle; in doing so capacity and production standards of different car manufacturers and vehicle safety standards may also be focused.

Abdul Razak Dawood directed the participants that the ECC decision and matter of premium is a serious issue and CEOs of firms should attend such high profile meetings. The participants should have full authority to give any statement /commitment.

He further read the ECC decision and told the participants that Ministers have signed and confirmed ECC decision to resolve the issue, and stated that Cabinet has rejected the claim of OEMs that no such practice of charging premium exists in the market.

After detailed discussion, it was decided that the federal government will initiate the legislation so that resale of new vehicles may be restricted to within six months by imposing transfer tax as percentage of price of vehicle.

Related: Dealers Involved in Charging Premium will be Blacklisted

The government will provide legal cover to OEMs that if a dealer is found involved in illegal practices then his dealership will be blacklisted across the board and such dealership will not be allowed to do business in automobile industry on same address/CNIC/ or some relative CNIC for any other OEM.

It was also decided that such companies will be banned and pinned down by FBR by their tax profiles that are using their black money to buy cars and are promoting the practice of premium.

Now that is a good move. Hope it’s implemented too

It will be a very positive step,to end fraud,especially by big dealers

That is indeed a very logical and dual effect decision to increase government income while, at the same curb the ghoul of premium on cars.

the “on money” business was a good side-income of Big-3. no wonder why Pak Suzuki is and the other two are incurring losses 🙂