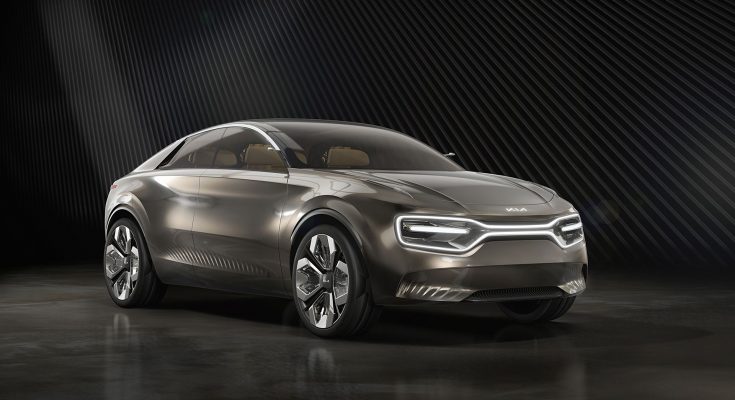 The concept coherently draws together elements of a muscular sports utility vehicle, a sleek and athletic family saloon, and a versatile and spacious crossover, ‘Imagine by Kia’ is intentionally designed to not sit within the industry’s predefined vehicle categories. As Gregory Guillaume, Vice President of Design for Kia Motors Europe explains:

“It’s a large C-segment car – the vehicle size that’s incredibly popular in Europe – but the only things it holds on to are Kia’s brand values. It hints at something familiar, but is something entirely new. I think of it as a category-buster, and a disruptor – it’s familiar and understood but at the same time progressive and new.” 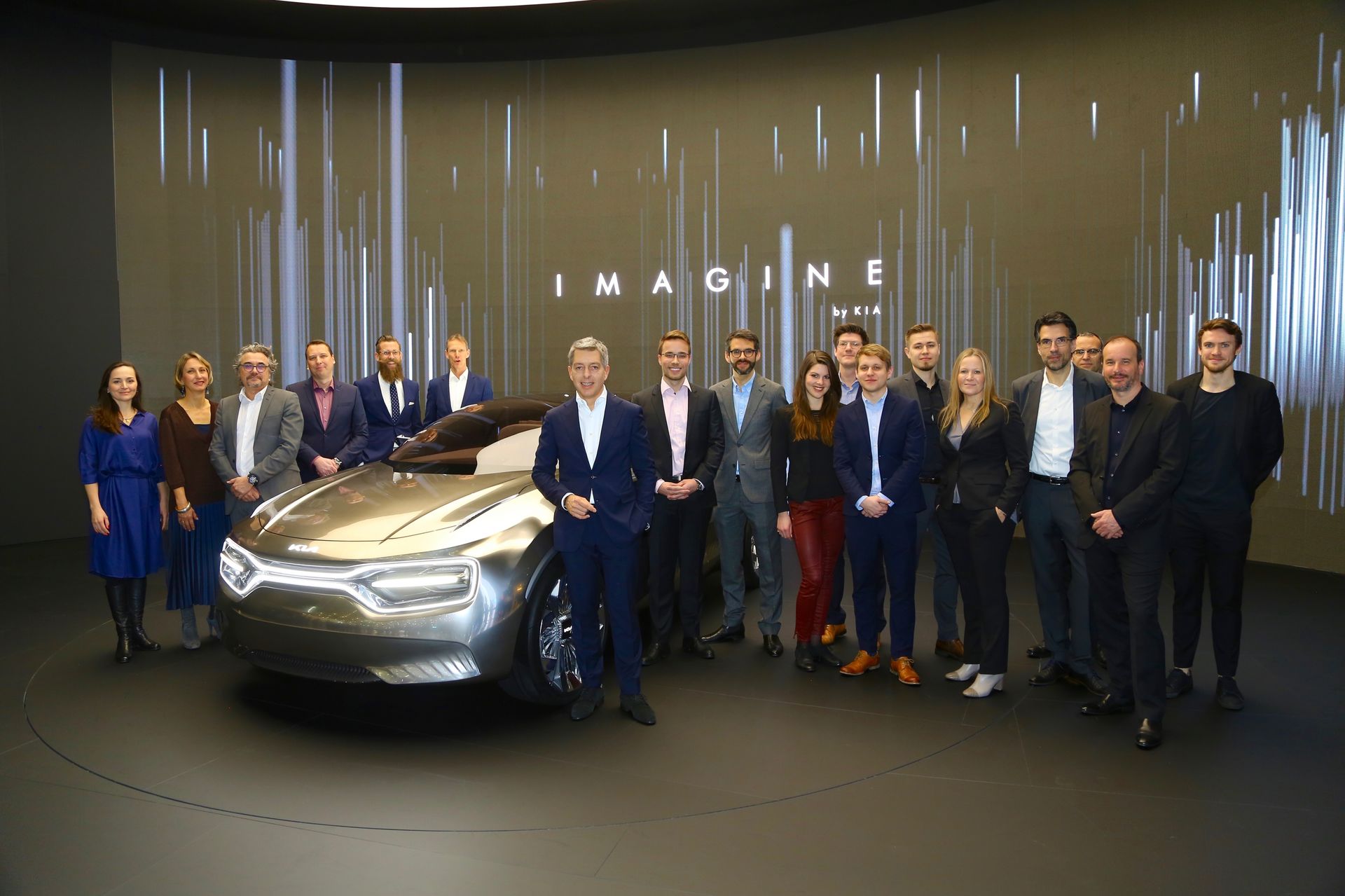 The Imagine concept instigate some ideas that could find the way into new Kia models. One of such ideas is illuminated “tiger mask” up front:

“The inspiration for the ‘tiger mask’ was to create the look and feel of the headlamps being suspended within a transparent block of glass. This identifiable lighting signature could potentially be deployed as a unifying design element across Kia’s future electric vehicle range.”

Another interesting idea about the Imagine concept has the presence of two trunks– front and rear, which perhaps will be possible by developing a new EV platform. The Kia design team also focused a great deal of their attention on the vehicle’s aerodynamics, ensuring the car sliced as cleanly as possible through the air to reduce turbulence and extend its range.

Unlike the award-winning e-Niro electric crossover, which is based on the existing architecture of the hybrid-powered Niro, ‘Imagine by Kia’ is underpinned by a low-mounted, induction-charged battery pack that powers a compact drivetrain. The powertrain layout created a chassis architecture that is distinctly different to that of a vehicle powered by an internal combustion engine. It allows to maximize cabin space and create an airy and spacious interior. Ralph Kluge, Kia Motors Europe’s general manager of interior design explains:

“We wanted the interior to have a twinkle in its eye, to be full of surprising and delightful touches that amuse, engage and attract both driver and passenger alike.”

21 individual ultra high-resolution screens curve their synchronized way across the top of the dashboard in a layout that’s at the same time both casual and coordinated. These 21 incredibly thin screens are a humorous and irreverent riposte to the on-going competition between some automotive manufacturers to see who can produce the car with the biggest screen, says Kluge. 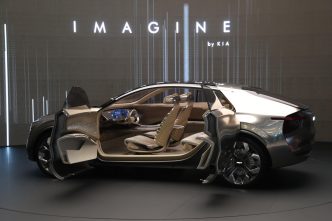 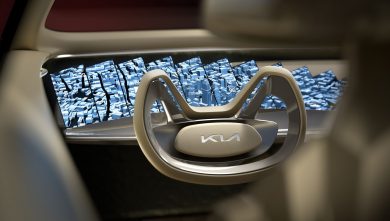 The cabin’s airy atmosphere is further enhanced by the floating center console that, like a wing, hovers independently above the low and flat floor. The doors – rear-hinged at the back for greater access – are swathed in a metallic fabric and leather, visually splitting the cabin into two distinct upper and lower levels. Guillaume further added:

“Kia prides itself on our power to surprise, and it’s this unorthodox approach that fired our collective imagination, moving us away from the rational, to embrace a warmer and more human approach to electrification. We imagined designing an all-electric car that not only answered consumer concerns around range, performance, recharging networks and driving dynamism, but one that also gave you goose bumps when you looked at it, and made the hairs on the back of your neck stand up when you drove it.” 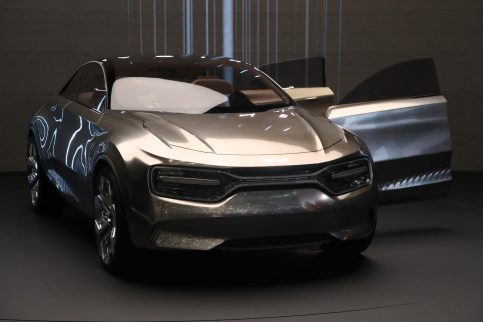 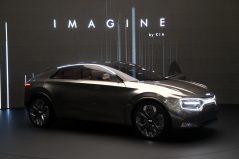 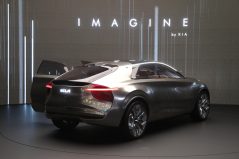 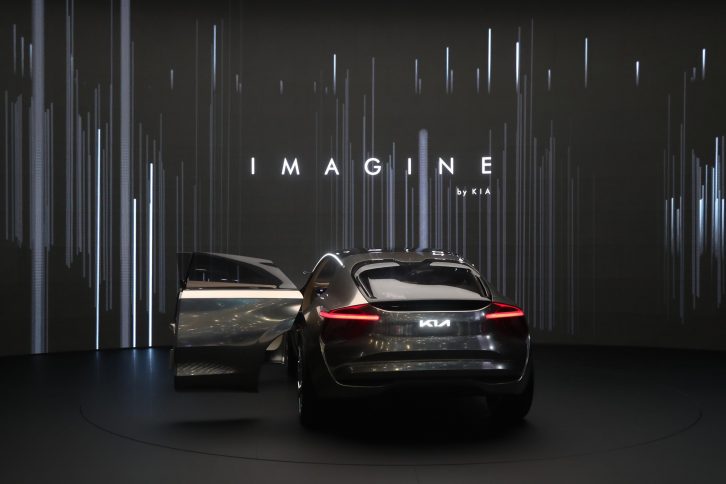