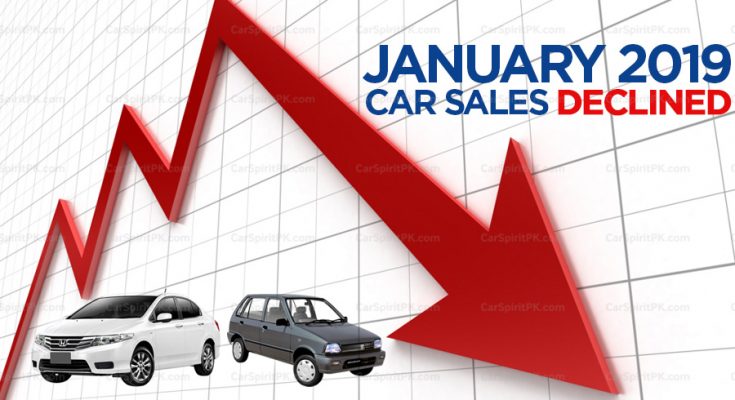 January, the first month of a new year is always considered healthy for auto sales. However this wasn’t the case in 2019. Sales of locally produced vehicles fell 4% in January 2019 as multiple price hikes and a continued ban on purchase of new cars by non-filers of tax returns discouraged many potential buyers.

In the recent amendment to the finance bill, government has lifted the ban on purchase of new cars by non-filers of tax returns, however official notification has not yet been issued. An estimated 60% of car buyers in Pakistan happen to be non-filers, hence the restriction on purchase dented the local automobile sales quite badly.

Furthermore since December 2017, Pak rupee has weakened 32% against the US dollar, as a result of which automakers have increased prices four to five times due to higher costs and the impact of rupee depreciation during this period.

On a yearly basis, Indus Motor which is performing better than the other two players (Honda & Suzuki) continued to report growth in auto sales, which were up 16% in Jan 2019. Corolla variants led the sales figures, up 26% year-on-year, however, sales of Fortuner and Hilux variants declined 45% and 5% respectively.

Sales of Honda Atlas vehicles grew 3% year-on-year due to 4% increase in Civic and City sales on a yearly basis. The BR-V MPV which is nicknamed an SUV, continued its declining trend with a fall of 2% in sales.

On the other hand, Pak Suzuki Motor Company continued to report a decline in sales, down 15% year-on-year in Jan 2019 after a little breather in December 2018. It is interesting to note that Pak Suzuki sales’ volume has fallen in every month since August 2018 except for Dec 2018. The decline in sales was led by Mehran, Bolan, Swift and Ravi variants, down 37%, 27%, 28% and 11% respectively. However, sales of ride-hailing favorites Cultus and Wagon-R rose 7% and 15% respectively on a yearly basis.

After I drove a Dec-18 model Mehran I was surprised to feel it’s sheet, it is as thin as an aluminium used on bathroom doors. The sheet literally was shaking if driven roughly over potholes.
Model 2014 is much more heavier and better built.

ironically that defines the progress of Pak Suzuki. We had a 1999 Mehran Plus that was bought zero meter in 1999. served for more than 350,000 km with us for more than 8 years, and performed like a real workhorse. Impressed with its performance my younger brother bought a zero meter 2007 model and it was TRASH in front of the 1999 one, for countless reasons. Now the examples coming out of the assembly lines makes me realize that 2007 TRASH was a gem in front of the latest ones

True, I guess, this why the old model prices are shooting up and this is the reason that sale have taken this toll. My cousin, who happens to live in Mirpurkhas informs me that model 2018’s suspension actually tore apart however, luckily, its repair wasn’t that expensive he had to pay 2,000 to 3,000 but still, it is hurtful to see a brand new vehicle’s suspension eating at pocket within a year. In the end Usman bhai one thing is certain; our society at large has become ignorant and indifferent and they just care only about themselves, we exploit our… Read more »