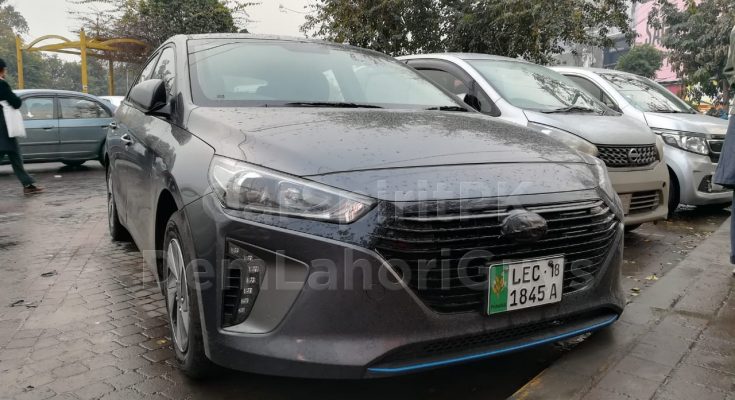 A Hyundai Ioniq has been spotted on the roads of Lahore one again. Previously it was spotted in traffic but this time it was caught parked at Liberty market. So this gave our fellows at DemLahoriGuys at good chance to capture its exterior as well as a sneak peek of its interior.

One might think it’s a random import but interestingly the vehicle had its emblem masked with a tape, a common practice by automakers to conceal the identity of a vehicle. Not only this, even the steering wheel had a tape on it to camouflage the logo. This does lead us to assume that the vehicles has been imported by Hyundai-Nishat for trial & testing purpose. 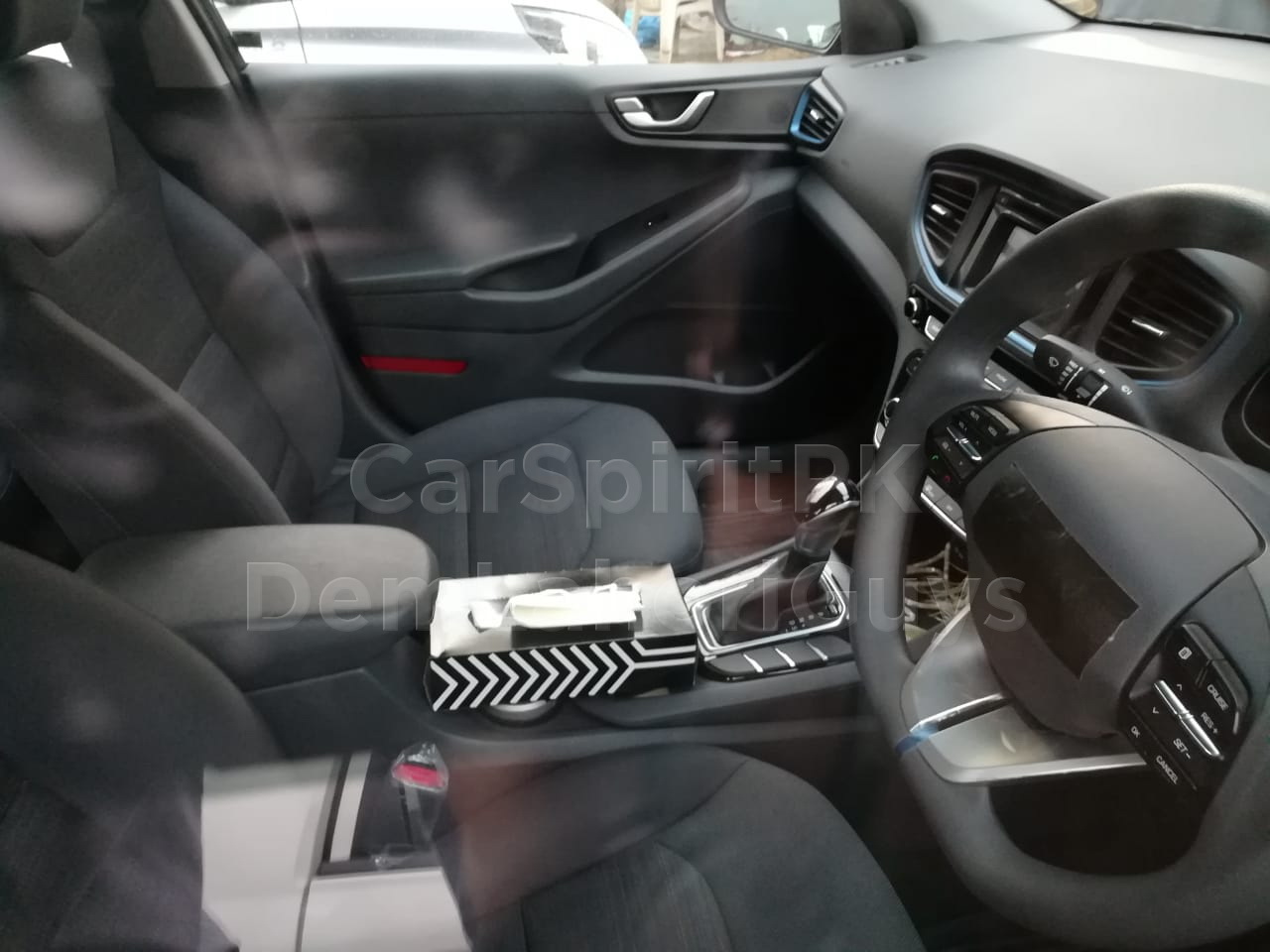 Back in March 2017, Nishat Group’s chairman Mian Mansha while talking to Dawn had said:

We are discussing with them… trying to convince them to also bring electric and hybrid cars. I see (that) the future is in electric cars. We could import these cars in the beginning and later also start assembling them locally. 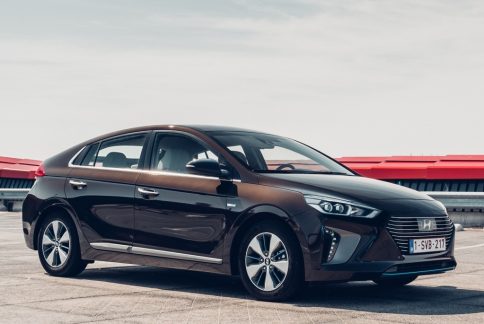 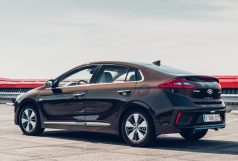 The Hyundai Ioniq is a compact five door liftback that comes in three derivatives– a hybrid, plug-in hybrid and pure-electric. The one spotted above is the hybrid version as far as the visual appearance is concerned. It gets powered by a 1.6 liter Kappa 4-cylinder direct injection engine capable of delivering 105 hp and an estimated 148 Nm of torque.

The Ioniq Hybrid’s electric motor delivers an estimated 43 hp of power with an estimated maximum torque of 169 Nm, powered by a lithium-ion polymer battery with 1.56 kWh capacity. In combination with the 1.6 liter engine, the Ioniq Hybrid offers an estimated total output of 139 hp and 264 Nm. The power is transmitted to the wheels via a 6-speed dual clutch transmission. 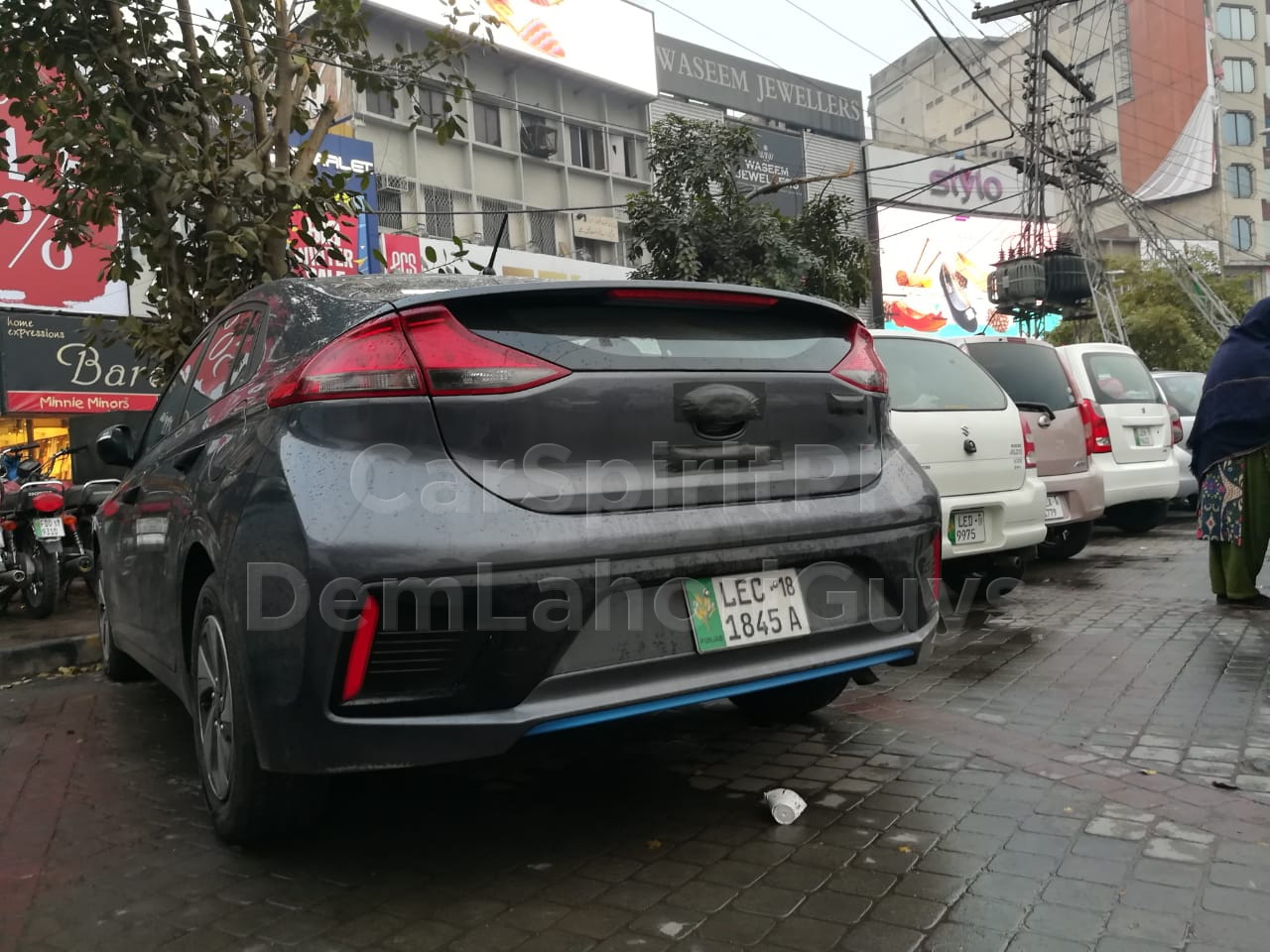 The Hyundai-Nishat manufacturing plant is being constructed in the industrial estate of Faisalabad spanning over an area of 70 acres with an investment estimated at over PKR 15 billion. The ground-breaking of the project was done in December last year and commercial operations are scheduled to begin by the end of 2019.

Hyundai Nishat Motor (Private) Limited, is a joint venture between three leading international business groups; Nishat Group, Sojitz Corporation (Japan) and Millat Tractors. According to a Hyundai official, locally-assembled Hyundai cars will roll out by March 2020. The company plans to produce 7,000 units in its first year, while it aims to expand its production capacity to 22,000 units within three years. 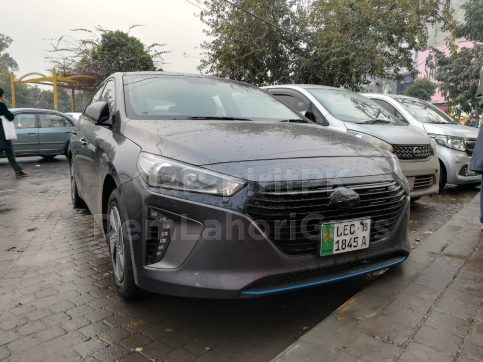 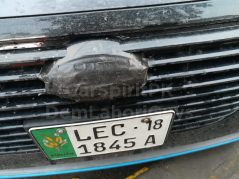 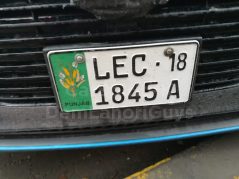 In its initial phase of operations, the company will reportedly introduce H100 commercial pickup, Tucson SUV, Kona Crossover and Elantra sedan in Pakistan by 2020. However the recently spotted Hyundai Ioniq does connects to Mian Mansha’s statement where he hinted the import of hybrid and electric vehicles as well.

Indus Motors already has a couple of hybrid vehicles on offer including the Camry and Prius. Whether or not the Ioniq will be included in the list of Hyundai-Nishat’s offerings is yet to be seen. However an Ioniq with hidden emblems does indicate Hyundai-Nishat might consider introducing the hybrid liftback here. Hyundai Tucson to Launch in Pakistan on 10th August Is Hyundai Bringing in the Tucson Diesel?

Are there any plans for import CBUs prior to selling locally built cars?