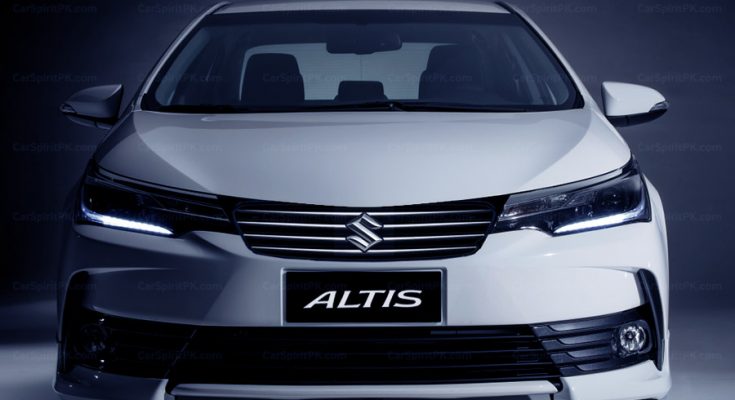 Earlier in March 2018, Toyota and Suzuki entered into a cross-badging agreement in India for a mutual supply of hybrid and other vehicles. As per the agreement, Suzuki will supply the Baleno and Vitara models to Toyota, while Toyota will supply the Corolla model to Suzuki.

Now as per fresh reports, Maruti has already started internal prototype testing of Suzuki badged Corolla Altis sedan. The version that is being tested at the R&D centre in Rohtak, Haryana is the 11th generation Corolla.

The Maruti Suzuki-badged Toyota Corolla will reportedly wear different bumpers, grille and alloy wheels to significantly differentiate itself from the original Corolla. The interior may remain mostly as is, although Maruti may change the infotainment system and upholstery while sourcing more components from the local suppliers.

The Toyota Corolla in India, is imported from Thailand as CKD product, and is available with 2ZR-FE 1.8-liter petrol and the 1ND-TV 1.4-liter diesel engine. However, Maruti Suzuki will most likely employ a more powerful version of the K15B 1.5-liter petrol engine that’s recently being offered with the Ciaz facelift and might even offer the E15A 1.5-liter diesel engine that is currently under development. This will allow the company to bring the prices down to a more attractive level.

Maruti Suzuki plans to sell 10,000 units of the rebadged Toyota Corolla a year. It will reportedly launch the Suzuki Altis sedan as its flagship 4-door model during the festive season of 2019.

On the other hand, sources have revealed that the first product to roll out from Toyota’s facility under the cross-badging agreement will be the Baleno. The Toyota Baleno will have a tweaked exterior including restyled head lights, tail lamps and the grille. As per reports 25,000 Balenos will make their way to Toyota’s facility. The rebadged ‘Toyota Baleno’ is expected to roll out from showrooms by mid-2019.

Although the cross-badging agreement between Suzuki and Toyota is currently being witnessed in India, it is worth to mention that the companies are also planning these models to be exported from India to Africa and other international markets. These rebadged vehicles will be sold through both Toyota’s and Suzuki’s respective outlets, thus extending the cross-sharing arrangement globally.