Sales of locally assembled automobiles dropped for the second consecutive month in June, this time too by 15% month-on-month, according to data released by the Pakistan Automotive Manufacturers Association (PAMA).

The downfall in sales is due to the restrictions on income tax non-filers, that are barred from purchasing new automobiles as announced by the Government of Pakistan in the Federal Budget 2018-19.

Non filers, who represent nearly 60% of the car buyers in Pakistan, have been barred from purchasing new cars with effect from 1st July 2018. All auto manufacturers had stopped the booking of cars by these people in May 2018, since the companies take at least three months to deliver a vehicle. However, they record sales soon after booking of a vehicle. The number of units sold in June dropped 15% to 18,518 units compared to the 21,813 units

However according to a report, the drop in auto sales has come in the wake of a recent price hike due to depreciating Rupee value against US Dollar and a gradual increase in auto-financing rates. The State Bank had raised the benchmark interest rate by 50 basis points in the month of May. 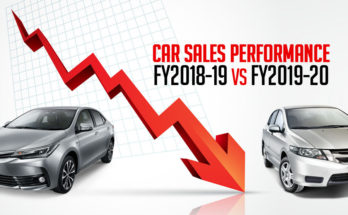