Toyota continues on with the development of next generation Corolla sedan, the world’s most popular vehicle.

As indicated earlier, the design of the front-end looks apparently lifted straight off the recently revealed 2019 Toyota Auris/ Corolla Hatchback. The full-LED headlights are made in the L shape, the upper grille gets slim leaving space for the massive trapezoidal lower grille.

At the side the next gen Corolla is designed with a new front-quarter window, you may also notice a more prominent shoulder line. Besides, the door mirrors are now placed at the top of the door panels. 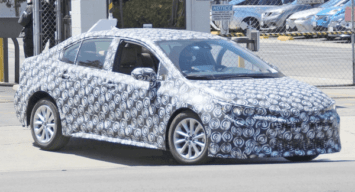 As far as the interior is concerned, the 12th gen Toyota Corolla sedan’s dashboard is expected to get the C-HR-inspired design with ample use of piano black and matte silver accents, a longer and wider center console, and a floating infotainment system.

The next gen Corolla will ride on the new TNGA modular platform that’s used in the CH-R, Prius and the Camry. Power will come from the new 2-liter direct injected four-cylinder engine with either a CVT or a six-speed manual transmission.

These spyshots with relatively lesser camouflage suggest that the Corolla will be officially presented in bigger auto shows towards the end of this year, for a possible 2019 debut. The current 11th generation Corolla was launched back in 2013 and will complete its six-year life span in 2019.