At the Honda Meeting 2017 event, the Japanese automaker wheeled out a test mule dubbed ‘Dynamic Study,’ which is in the guise of the tenth-generation Civic sedan, for journalists present to sample. The test mule differs from the regular Civic, in that the standard CVT mated to the 1.5 liter VTEC Turbo engine has been replaced with an eight-speed dual-clutch transmission.

According to Japanese publication Car Watch, the dual-clutch unit is about the size of a conventional five-speed automatic, and promises a 15% improvement in power delivery and 8% better fuel efficiency. 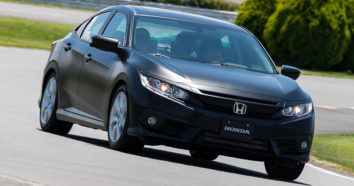 Aside from the powertrain, the ‘Dynamic Study’ also features a revised chassis that is meant to offer improved responsiveness and stability. Changes include a more rigid rear sub-frame and floor that improves bending stiffness by as much as 57%, while torsional rigidity is up by 25%.

To go along with these chassis improvements, the test mule also received a revised front and rear suspension setup, a more aerodynamic body (drag coefficient reduced by 14%), as well as revisions to the electric power steering and brake response.

Despite being available in several markets already, the 10th gen Civic will only go on sale in Japan by late July, as revealed by Honda president and CEO Takahiro Hachigo, likely marketed as a 2018 model year car. During the same press conference, he also stated that the 2018 Accord for the US market will feature a new 10-speed automatic transmission.