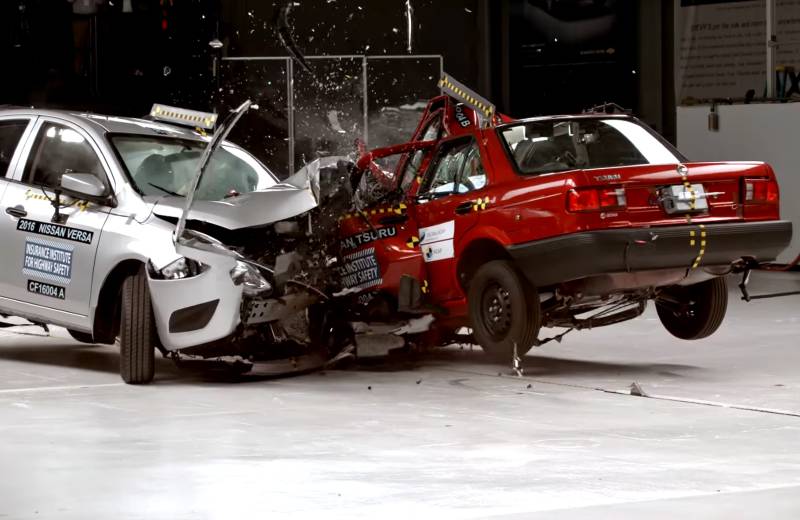 The B13 Nissan Sunny (1990-1994) was a popular car in our country back in its time. Off course during that era there were several cars to choose from other than a handful of Toyota & Honda. Mitsubishi, Mazda & Nissan cars were found in considerable number on our roads, and so was the B13 Sunny, which was also available in Prime Minister’s Yellow Cab Scheme with a diesel engine.

However you might not be able to recognize this B13 Sunny at the end of this IIHS crash-test video. It’s basically a Mexican built Nissan Tsuru which is a re-badged B13 Sunny with minor cosmetic changes & goes up against a 2016 Nissan Versa and illustrates how far safety engineering has come in two decades. No matter how fondly you remember the old Sunny, it is woefully outdated in the safety department.

The 50 percent overlap crash at a combined closing speed of 80 miles per hour nearly obliterates the Sunny and makes it dreadfully difficult for the driver to survive, but the Versa’s safety engineering does what is expected of it.

It is still sadly common that vigorously decontented (when a car company takes away features from a car and its price stays the same) and scarcely equipped cars are being offered in developing markets by car makers, either by re-birthing outdated cars or engineering simpler cars with a “for the price, this will do” attitude. An earlier crash test video series of Indian-market cars showed just how severely cars like this will crumple, and at even more modest speeds.

It’s not strange for a car enthusiast to wistfully remember cars that were discontinued long ago, wishing they were still available new, but this is the other side of the coin: they just do not hold up like a new car.

Also we must take into account the vehicle safety aspect before spending a hefty amount on buying a brand new vehicle. Majority of the vehicles that are available in our country falls in the category of decontented cars while we tend to ignore those with better value for money & better safety. Its time we should change the way we make our car buying decisions.