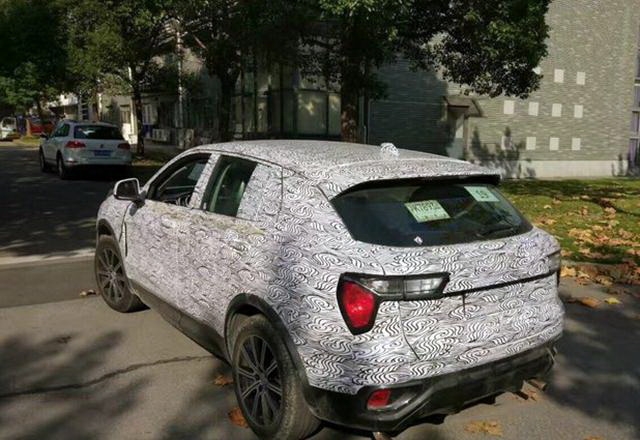 Lynk & Co, Geely Auto’s newly launched brand, is developing a compact SUV which is internally referred to as the ‘Lynk & Co CX11’. The CX11’s interior has also been spied undisguised, as the compact SUV has been spotted on public roads in China.

CX11 was previewed as the Lynk & Co 01 concept in Sweden last month. The spy shots show exterior details revealing that it would be very close to that of the concept, though the tail lights seem to have been tweaked slightly in the production version.

The Lynk & Co CX11 will be based on the CMA modular platform that will underpin future Volvo (40 and 60 series) models. CX11 will be offered with a 1.5-litre turbocharged three-cylinder petrol engine and a 2.0-litre four-cylinder petrol engine, as well as a hybrid and pure electric options. A 7-speed dual-clutch automatic transmission will send power to the wheels and a four-wheel drive system to be available as an option.

One of the key aspects of the Lynk & Co CX11 will be the connectivity it will offer. The CX11 will be a tech-laden SUV and the company claims that it will be the most connected car to date, with its own Cloud accessed via the car’s 10.1-inch touch screen, and a Smartphone app that will control all aspects of the car including a ‘digital car key’ that can be shared with friends.

A full suite of mobile connectivity solutions will be standard, and for that purpose, work is in progress in collaboration with Ericsson. Additionally, unique routes to market with Alibaba and Microsoft are being explored, to cut out dealers. “Connectivity to Lynk & Co will be what safety is to Volvo,” says Mats Fagerhag, the head of the company’s China Euro Vehicle Technology (CEVT).

The Lynk & Co CX11 is expected to be launched in China towards the end of 2017. China will be the company’s first market, but exports are planned for the U.S. market and Europe as well.