As the China-Pakistan friendship car rally rolled through the Khunjerab Pass, the icy temperatures at one of the world’s highest passes thawed by the warm hospitality extended by Pakistan.

“The weather was extremely cold at the Khunjerab pass but that was undone by the warm hospitality extended by Pakistanis,” said one of the participants of the China-Pakistan Friendship Car Rally.

The driver was part of a 22 car motorcade carrying 52 Chinese passengers who are driving along the route of the China-Pakistan Economic Corridor and the old Silk Route. The rally will travel the length of Pakistan to Gawadar before crossing into Iran and making its way to the United Arab Emirates. 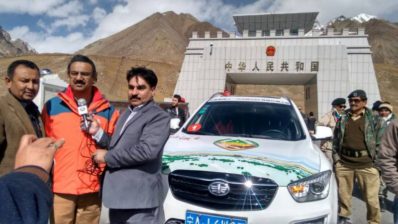 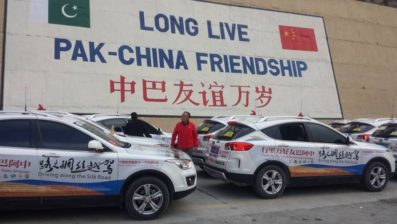 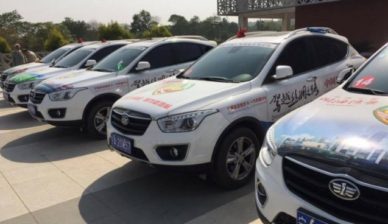 “The Pakistani authorities extended their hospitality and provided all facilities, guidance and support which was remarkable,” said another Chinese rally driver after they had stayed overnight in Gilgit.

The rally left the region on Saturday morning, heading for Islamabad as its second major stop. Earlier on Friday, the friendship rally crossed into Pakistan at the 4,693 meters high Khunjerab Pass from China’s Xinjiang region.

“That is the spirit of friendship, in which it does not matter at what height the place is or how cold the weather is,” said a rally driver.

As the convoy entered Pakistan, security forces at the pass presented them with a guard of honour. The participants were welcomed by Pakistan authorities and a small ceremony was held to pay tribute to Chinese people and to the time-tested friendship between the two countries. Flags of both countries were also hoisted during the ceremony. On Saturday it passed through G-B’s troubled district of Diamer amid tight security. Despite the stringent measures, people lined up along the road to watch the rally drive by. “People were so excited to see the rally,” said Shahuddin, a resident of Chilas town who saw the rally drive by. “It was an historic occasion.”

In addition to the public, the additional deputy commissioner Dildar Ahmed and senior police officials also showed up to welcome the rally in Chilas.