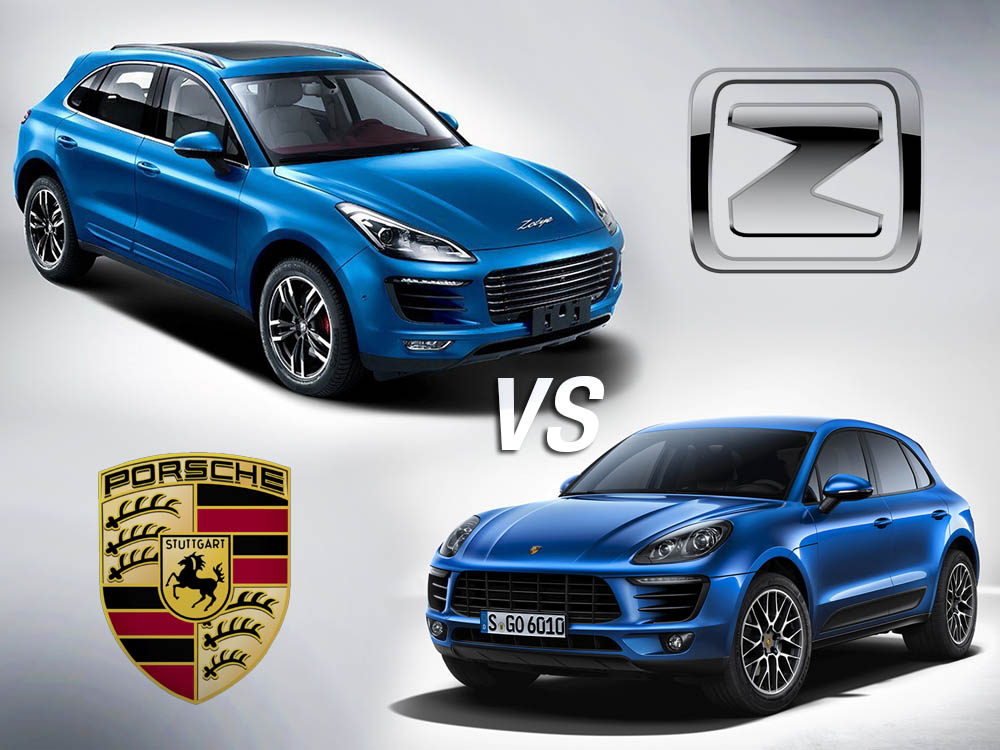 Chinese cars became notorious on the global scene because of copied designs. Chinese car brands have a proud history of copying car designs from other manufacturers. Some are blatant rip-offs others are more like an inspiration to the original. There are dozens of examples where Chinese companies copied designs from manufacturers like Toyota, Honda, VW, Audi, Porsche, BMW, Range Rover, Mini, Rolls Royce and the list goes on.

Related: All You Need To Know About The Upcoming Zotye Z100

Most Chinese car manufacturers moved on to develop their own original cars, however there are still many manufacturers which heavily rely on pirated designs and do it rather efficiently. Among the most recent example is the Zotye SR9 which is a blatant Porsche Macan clone. Not only that the Zotye SR9 resembles the Macan from the outside, it’s almost a replica in terms of interior design as well. Two engines are available, a 1.5 liter turbocharged 150hp and a 2.0 liter turbocharged 190hp engine mated to five-speed manual or a six-speed dual clutch transmission.

Porsche is considering filing a lawsuit against Zotye but nothing will likely happen considering the past examples. It’s even more interesting if we look at Zotye’s lineup which almost entirely consists of copied designs.

A recent example of a clone which went insanely successful in China was the Landwind X7 which is a copy of Ranger Rover Evoque. The success of X7 has taken the popularity of Landwind to a new level & perhaps Zotye want to go even further.

However it isn’t just about the recent copied examples mentioned above, Zotye has a good history of pirating popular automobile designs, their Z300 sedan is a carbon copy of Toyota Allion, the Z700 saloon is heavily inspired by an Audi A6 while the Zotye Nomad is a Daihatsu Terios replica.

HRL Motors, part of Habib Rafiq Group are teaming up with Zotye of China to introduce affordable cars in the market. Habib Rafiq (Pvt.) Limited has been working in Aviation, Infrastructure, Housing, Design and environmental areas other than its strong standing in industrial projects for Power, Chemicals, Petro chemicals, Roads, Motorways, Buildings, Oil & Gas sectors. The company is now stepping into the automobile sector with Zotye branded vehicles.

Zotye Holding Group is based in Zhejiang China with a factory occupying a total of 1.2 million square meters and over 3000 staff with total assets of over 3 million RMB. Zotye mostly develop vehicles based on either acquisition of an out-gone platform, or simply copying a successful model like most Chinese manufacturers do. They are best known for their popular mini SUVs which accounts for nearly 83% of Zotye’s sales. Besides manufacturing vehicles, Zotye also develops new energy (electric) vehicles, engines, auto parts, auto moulds and transmissions. It will be very interesting to see how these Chinese companies will compete in our market. With a mix of original & copied vehicles, if they are able to offer the quality that is exported to European nations with a price tag lower than the existing options available here, the Chinese cars will surely take over the Pakistani automobile market.