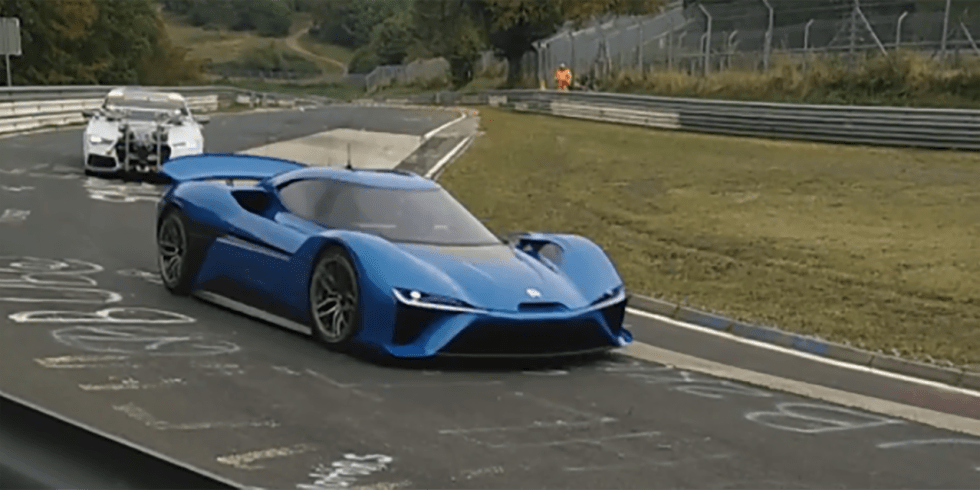 A NextEV electric supercar test vehicle was spotted testing at the Nurburgring. The NextEV electric vehicle is supposed to provide over 1 MW of power (about 1,360 horsepower) and do 0-100 kph in less than three seconds.

Related: The 1360 HP NextEV Electric Hypercar To Be Unveiled Next Month

There were many startups that announced developing an electric supercar, but nothing went beyond a generic concept car and loads of promises of world-beating performance. However NextEV might actually have something to prove.

In the clip below, which appears to be a promotional video being shot, you can see the NextEV being followed by an Audi A7 strapped full of camera equipment. It is expected that NextEV will formally make its debut this November, and will be available in limited quantities in China, the US, and possibly other markets at some point down the road.

The Chinese-based electric vehicle start-up, headed by former president of Ford of Europe Martin Leach, has already indicated that the hypercar will set new standards in electric car performance. According to Martin Leach, who certainly has big dreams for his company, says that NextEV will soon be recognized as the 3.0 version of an automaker, after the general 1.0 OEMs we see everywhere and the 2.0 versions, as represented by Tesla.

There are many other electric supercars under development in China, from Beijing Auto, Qiantu Motor, and Titan, but none comes close to 1360 horses. And it is likely for the NextEV to raise the flag as the first ever Chinese electric supercar that goes in production.