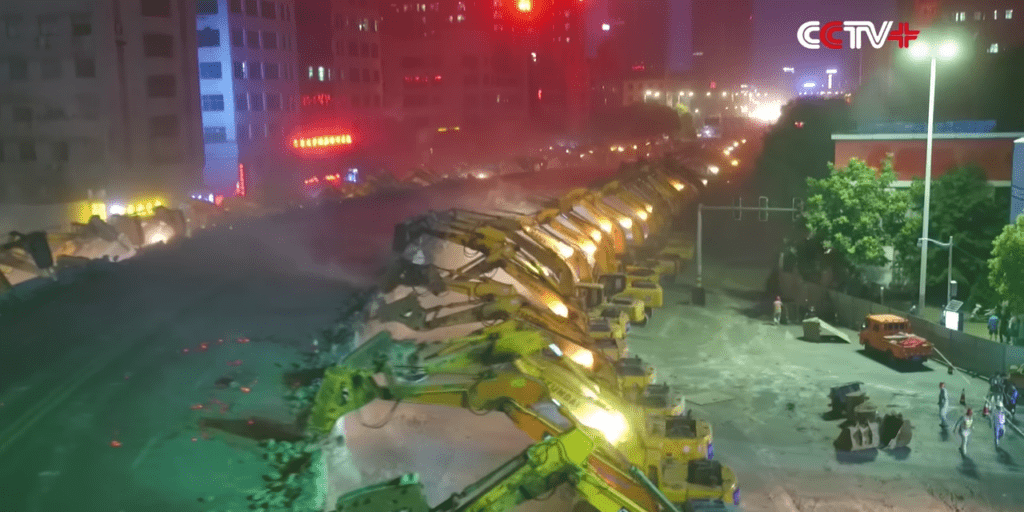 The Chinese can be tremendously efficient at demolition. In a stunning display of madness and efficiency, a Chinese construction firm used an army of excavators to pull down an aging overpass in just one night.

According to Business Insider, the marathon demolition project began on August 26 in the eastern Chinese city of Nanchang. At around 10:30 pm, 116 excavators lined up on either side of a long, two-lane overpass that cut through the middle of the city. Once in position, the vehicles began chipping away at the nearly 1,700-foot span with hydraulic hammer attachments mounted to their arms. By the end of the night, the main structure of the overpass was gone. The entire demolition and removal process took just 56 hours.

CCTV, China’s state broadcast agency, reported that the twenty-four year old overpass was demolished because it was too narrow to handle the increasing volume of traffic in the area. In addition, the span was standing in the way of part of Nanchang’s new subway system.

This isn’t the first time Chinese authorities have thrown large numbers of men and machines at a problem to fix it quickly. Last November, a bridge in Beijing was demolished and replaced in just 43 short hours.

An increase in car ownership throughout China has put a serious strain on the country’s infrastructure, especially bridges and overpasses. Business Insider states that efficient and well-orchestrated projects like the bridge demolition in Nanchang are extremely important as a way to keep up with the country’s pace of development.

Not an army of Chinese excavators,

An army of Korean excavators in China.

As Hyundai is a Korean brand.